Khania Dighi Mosque also called Rajbibi Masjid, is located on the western bank of Khania Dighi, which is about a quarter mile away from the high mud wall of the ancient city of Gaur on the north and the Balia Dighi on the west in Nawabganj district. The building is now in a good state after thorough repairs undertaken by the Directorate of Archaeology, Bangladesh. 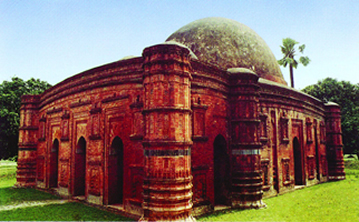 Built mainly of bricks, the mosque consists of a square prayer chamber, 9m a side, and a verandah of 9m ' 3m in the east. The prayer chamber is roofed over by a large hemispherical dome, while the verandah is covered by three small domes.

The large dome of the prayer chamber is carried on half-domed squinches on the corners and blocked arches on the four cardinal sides and the pendentives in between the arches. The three small domes of the verandah are built on pendentives. The prayer hall is entered by three archways from the verandah which correspond in height and width to the three archways on the eastern facade and a single archway from the north and south sides. The four exterior angles of the building are marked by octagonal towers rising upto the roof level. Two other towers distinguish the points where the verandah joins the prayer chamber. All the towers are divided into sections by raised bands. The cornice of the building is slightly curved.

The qibla wall, recessed with three semi-circular mihrab niches corresponding to three eastern archways, is internally veneered entirely with blocks of granite stone. Blocks of stone have also been placed in the form of a lintel at the springing point of the arches on three other walls inside the prayer hall. The same sort of stone blocks forming the lintel have been extended to the verandah walls. The blocked-arches and squinches which support the dome above are erected over stone columns embedded into the walls. The two east-west arches which have divided the interior of the verandah into three parts are also carried on engaged stone columns. Of the three mihrabs the central one is larger than the side ones and shows rectangular projection on the outside along the height of the wall. Each of these mihrab niches, contained within a rectangular frame, is arched with cuspings in the face.

The whole building was once embellished with terracotta ornamentation, traces of which survive here and there both inside and outside the structure. The spaces in between the two moulded cornice bands which run all round the building are enriched with rows of small arcades carrying vegetal motifs. Further down is a couple of flat bands embellished with rows of lozenges and diaper patterns. The outer facade of the four walls are marked by two rows of boldly projected rectangular panels that give the impression of windows, a decorative device very popularly practised in the Sultanate monuments of Bengal such as the eklakhi mausoleum (early 15th century) at Hazrat Pandua, the tantipaDa mosque (1480) and the chhota sona mosque (1492-1519) in Gaur. Each of these panels is again decorated with a cusped arch on pillars showing hanging motifs within and rosettes on the spandrels.

Much of the original ornamentation is still preserved on the qibla wall inside. The ornately carved pillars which carry the mihrab arches depict the conventional hanging motif and include other designs. The spandrels of the mihrab arches are enriched with full-blown rosettes, while their rectangular frames are very nicely ornamented with vine scrolls. The pendentives in between the blocked arches and squinches are marked with big tiered-rosettes. Inside the circular base of the dome there is a moulded cornice band, the upper border of which is decorated with qangura merlons and the upper with a chequered design.

The mosque is not dated by any inscription although there is an epigraph over the central mihrab containing only verses from the Quran. But on stylistic ground it has been assigned to the later Ilyash Shahi period, say around 1480 AD.

It is important to note that the mosque, consisting of a single-domed prayer hall and a three-domed verandah on the east, marks an improvement over the simple square single-domed type, which was so common in Bengal. The earliest known specimen of the type is the gopalganj mosque (1460) in Dinajpur town. The type was very popular in Bengal unlike in other parts of India. There are numerous other examples, such as the chamkathi mosque (1475) and the lattan mosque (1493-1519) in Gaur, the masjidbari mosque (1465) in Patuakhali, the sankarpasHa mosque (1494-1499 AD) in Sylhet, the naVagram mosque (1526) in Pabna and the atiya mosque (1609) in Tangail. Where did the idea of this type of mosque come fromFoodgrain Was it an innovation of Bengali architectsFoodgrain Investigation into the architectural history of the Muslim world reveals that it resembles a popular type of mosques built in Turkish Anatolia under the Seljuks and the early Ottomans. It seems that the influence came from this distant land by way of immigrant Seljuk artists or craftsmen who took shelter in distant lands due to Mongol incursions into their territory. [MA Bari]