Administration Lohagara Thana was formed in 1981 and it was turned into an upazila in 1983. 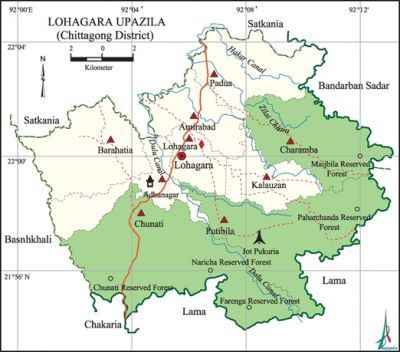 History of the War of Liberation The Pak army conducted heavy plundering in this upazila in 1971; they also set many houses of the upazila on fire. The Pak army brutally killed 15 villagers of Amirabad Banik Para. The local razakars captured 12 persons from the Hindu Para (Hindu populated area) of Chunti Deputy Bazar, took them to the Chandnaish Police Station and later on killed all of them. The freedom fighters killed 17 razakars at Jotpukuria in Putibila union.

Marks of the War of Liberation Mass grave 1 (Jotpukuria of Putibila union).