Administration Mohanpur Thana was formed in 1917 and it was turned into an upazila in 1983. 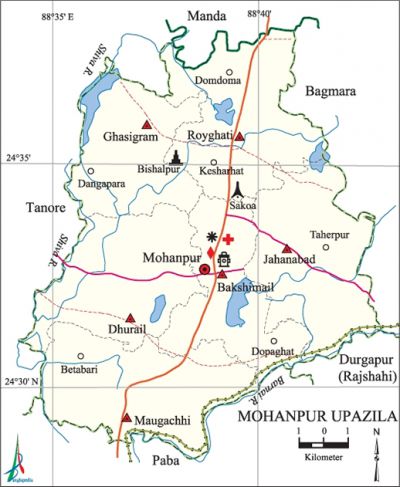 History of the War of Liberation In 1971, the local razakars established a camp in a madrasa at village Sankoa and conducted mass torture to the families of freedom fighters and other innocent people of the near by locality. The razakars killed freedom fighter Abdul Aziz in his residence at village Bihatra; they also sacked his house. In November the freedom fighters launched an attack on the razakar camp and killed six razakars.

Marks of the War of Liberation Mass grave 1 (adjacent to the Sankoa Madrasa).

Hats, bazars and fairs Hats and bazars are 23, fairs 2, most noted of which are Keshore Hat, Ekdil Tala Hat, Dhopaghata Hat, Maugachhi Hat and Ras Mela.