Administration Muladi Thana was formed in 1899 and it was turned into an upazila on 24 March 1983. 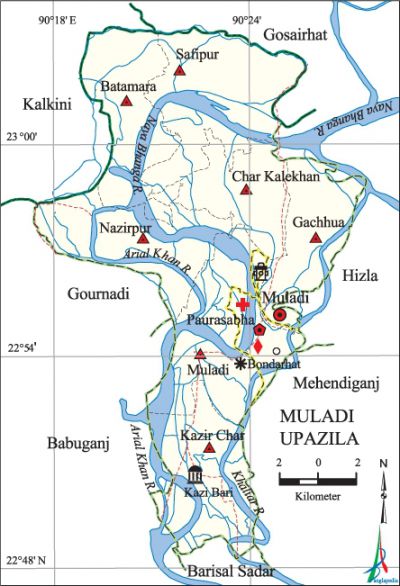 Historical events Once Muladi was under the Dhaka-Jamalpur Revenue District. Up to 1873 there was only one middle class interest here and by 1908 there emerged many middle class families in this region of which the Takulder and the Howlader were the most influential. After the Permanent Settlement, a Revenue Circle Officer was appointed in Muladi Thana. The people of Muladi played an important role in the Partition of Bengal movement (in 1905), kHilafat movement and in the language movement of 1952. In 1971 the Pak army killed nearly 42 persons by mortar and machine gun firing on both sides of the river. The freedom fighters destroyed the gunboat of the Pak army at Nandail Bazar; following this incident the Pak army conducted mass killing for about a week in the nearby locality.

Marks of the War of Liberation Tombs of the freedom fighters at Khaserhat.

Natural disasters The cyclones and floods of 1961 and 1965 submerges the areas on both banks of the river and also caused damaged to crops, particularly to Aman paddy and Pan Baraj (harvest of betel leaf) of the upazila.