Administration Munshiganj Thana was formed in 1901 and it was turned into an upazila in 1984. 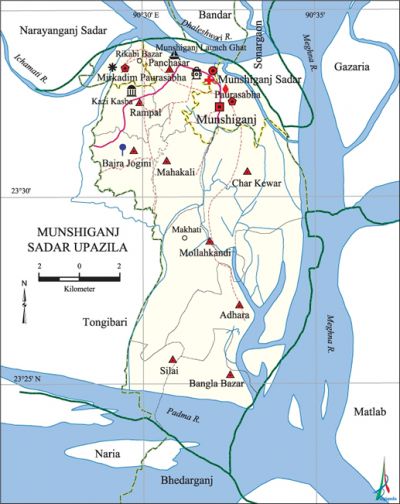 History of the War of Liberation In 1971 when the Pak army began mass-killing in Dhaka city on the night of 25 March the students and youths of Munshiganj raided the treasury and captured arms and ammunitions to resist the Pak army. They successfully guarded the riverside area to check the onrush of the Pak army towards Munshiganj. The people of Narayanganj in alliance with the youths of Munshiganj resisted an attack of the Pak army on 31 March. On 9 May the Pak army established military camp in Munshiganj; two days later the Pak army killed 14 innocent persons. On 14 May the Pak army raided Kewar and killed a number of youths. During the war of liberation, the house of Radhika Mohan Ghosh at village Nayagaon on the bank of the Dhaleshwari had been the secret shelter and outpost of the freedom fighters. The freedom fighters used to launch attacks on the Pak army coming through the river from the rooftop of this pucca building.