Patuakhali District (barisal division) area of 3220.15 sq km, located in between 21°48' and 22°36' north latitudes and in between 90°08' and 90°41' east longitudes. It is bounded by barisal district on the north, bay of bengal on the south, bhola district on the east, barguna district on the west. The land of the district is composed of alluvial soil of the meghna basin and of a number of small char lands. 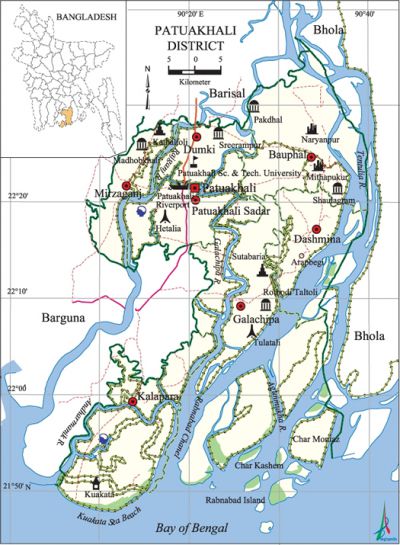 Administration Patuakhali, a sub-division of the Bakerganj district, was elevated to a district in 1969. Of the 7 upazilas of the district galachipa is the biggest (1267.89 km) and dumki is the smallest (92.46 sq Km).

Marks of the War of Liberation Mass grave 3 (inside the old jail compound of Patuakhali town, at south-western side of the new jail and at Tulatali); memorial monument 4 (in front of the old Town Hall, at the premises of Muktijoddha Sangsad, at the premises of Chikanikandi High School and' Panpatti).

Important installations and Tourists spots kuakata, the second largest tourist centre of the country, is located on the southern extremity of Kalapara upazila. Both sun rise and sun set can be viewed from the 18 km long Kuakata sea beach. The Shutki (dried fish) Palli is located 7 km on the west of Kuakata. Dry fish is exported in different parts of the country from this Shutki Palli. Besides, to attract the tourists there are Sea Fish Museum, Bura Gauranga Sea Channel, Kuakata Sima Buddhist Bihara, statue of Buddha, Rakhain Palli, Narikel Bithi (series of coconut trees), Jhouban (tamarisk trees), Fatrar Char (mangrove), Gangamatir Char, Rash Mela, Lembur Char, etc. The Sun rise and the sun set can be enjoyed from Sonar Char of the Galachipa upazila; other tourist attractions of this upazila include Kalaraja, capital of the kingdom of Queen Kamala of Chandradwip; Babanabad and Bhangabali Channels. Tourist spots of Bauphal upazila include capital of Chandradeep Kingdom (Bakla of Kachua, later on transferred to Rajnagar), Kazi Bari, paternal homestead of ak fazlul huq (Bilbilas), Kamala Rani Dighi (Kalaiya), Kuthibari of Ghaseti Begum (on the bank of the river Tentulia) and Kanai Balai Dighi (Kanchipara). [Iffat Jerin]