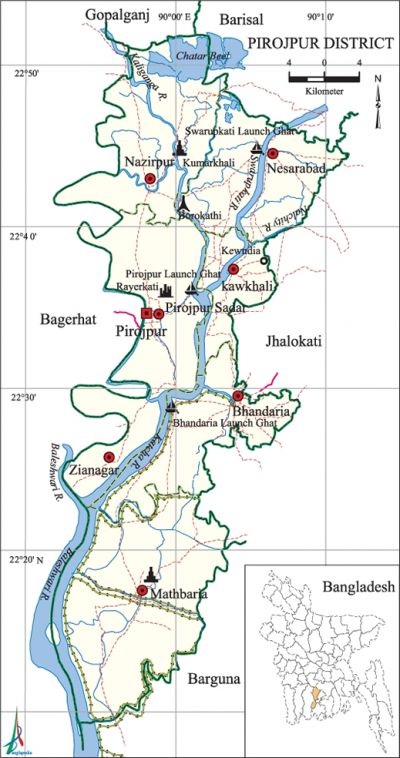 Historical events Peasant rebellion was held at Singkhali in Bhandaria upazila in 1857. Peasant leaders Gagan and Mohan Miah revolted against the British rule and the local zamindars in which 17 revolutionaries were killed. In consequent of adopting the resolution of continuing Non cooperation Movement and Khilafat Movement simultaneously in a conference in 1920 in Kolkata, its reaction was visible in Pirojpur. In 1927 a movement was held in Pirojpur under Lawyer Mofizuddin of Chakhar and Syed Habibur Rahman in protest of 'Kulkati Killing'. The freedom fighters attacked the Bhandaria Police Station in August 1971 under Subedar Aziz Shikder in which a number of razakars were killed. On 29 November the Pak army retreated from Bhandaria Upazila having the Bhandaria Bandar sacked. During the war of liberation the freedom fighters of Kawkhali upazila established a strong base at village Keundia. In the month of August the freedom fighters raided the Kawkhali Police Station and captured arms and ammunitions. In the month of September, 17 Pak soldiers and razakars were killed in a battle with the freedom fighters at Keundia of this upazila. Besides, Pak army killed 30 innocent persons of Amrajuri and burnt a number of houses of the upazila. During the War of Liberation the Pak army raped and brutally killed a women named Bhagirathi (Birangana) for supply of Pak military information to the freedom fighters. The Pak army tied her alive with a motor cycle and drugged her until death; later on her dead body was thrown in the Baleshwari River. In the month of May the razakars killed 12 freedom fighters at a place called Jhutipunia of Mathbaria upazila. On 15 May the Pak army conducted mass killing in Dirgha union of Nazirpur upazila; they also set many houses of the union on fire. On 3 December the Pak army, in collaboration with the local razakars, killed 7 persons at villages Satkachhemia and Bainkathi of this upazila. The Pak army launched attack on Nesarabad upazila on 11 May for the first time. During May to June the Pak army, in collaboration with the local razakars, conducted heavy plundering in different villages including Miar Hat and Inder Hat ports; they also set many houses and shops of these areas on fire. Besides, they also killed about 100 persons in this upazila. The Pak army killed 7 persons at a time of the same family at village Barajkati under Sohagdal union. On 10 November the Pak army and their local collaborators tied 18 innocent persons together with rope and tortured them to death in front of Barajkati Kachhari. During the War of Liberation the Pak army, in collaboration with their local agents, killed about one thousand people of the upazila. They conducted the most brutal killing at Peara Bagan (guava garden) of Atghar Kuriana. After the end of the War of Liberation about 300 human skulls were collected from a ditch located behind the Kuriana College compound.