Sandwip Upazila (chittagong district) area 762.42 sq km, located in between 22°16' and 22°43' north latitudes and in between 91°17' and 91°37' east longitudes. It is bounded by companiganj (noakhali) upazila on the north, bay of bengal on the south, sitakunda and mirsharai upazilas and Sandwip Channel on the east, noakhali sadar upazila and Hatiya Island on the west.

Administration Sandwip Thana was turned into an upazila in 1984. 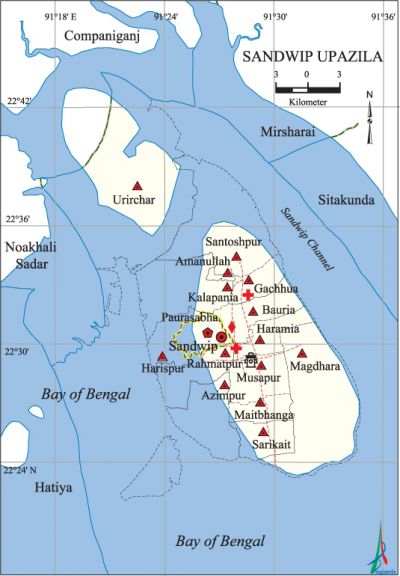 Historical events The first peasant movement in Bengal was initiated in 1767 under Abu Torab in this upazila. Besides, movement of violation of law was held in 1930 under Keshab Ghosh, the president of the Congress Party. In 1966 bangabandhu sheikh mujibur rahman started campaigning the historic six-point programme from Sandwip. During the war of liberation in 1971 this upazila was under Sector 1. On 10 May, the Pak army shot dead a number of people including lawyer Jahedur Rahman at Sandwip town. This upazila was liberated on 7 December.

Natural disasters Many people were victims of the devastating cyclones and tidal bore of 1877, 1963, 1970, 1985 and of 29 April 1991. Besides, these natural disasters also caused heavy damages to settlements, livestock, crops and other properties of the upazila.