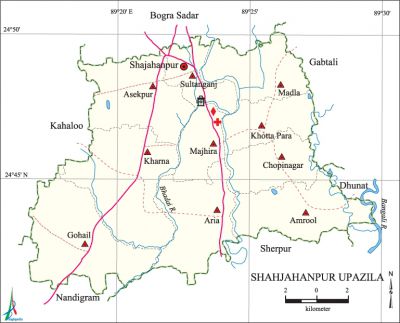 History of the War of Liberation An encounter was held between the freedom fighters and the Pak army on 1 April, 1971, with casualities from the both sides. In this encounter the freedom fighters captured the arms and ammunitions of the Pak army after their surrender. On 23 April, the Pak army entered into the Bogra town and conducted killing, torture and burning of settlements in collaboration with the local Beharis. On 11 November the Pak army and the razakars captured 21 persons from Thanthania Khandar area and later on killed 11 of them by gun shot at a place called Bibir Pukur.

Marks of the War of Liberation Mass grave (Bibir Pukur).

Natural disasters Many people were victims of the floods of 1955, 1969, 1970, 1984 and the cyclone of 1864. These natural disasters also caused heavy damages to settlements, crops and livestock of the upazila.