Tanti (weavers) handloom manufacturers working at indigenous weaving machines run by hand and foot. Common tradition goes that the tanti community as a socially defined group developed under the pressure of the natural demand for woven cloth. charyapada, the ancient inscription of Bangla language contains elaborate description of the lifestyle and nature of work of the weavers indicating that this artistic occupation existed even in ancient Bengal. The Arthasastra of Kautilya inscribed some fine fabrics of the earliest times such as moner mata, snigdha, dukul, patronnada, khowma etc.

History and archeological discovery suggest that Bengal was famous in the distant past for her textile production. cotton was the chief raw material for textile work and it was produced abundantly in Bengal. During the first century AD, Dhaka muslin became famous in Asia and Europe. 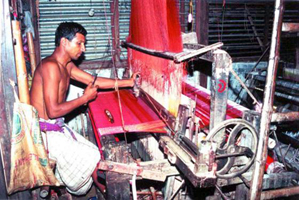 These and many other fabrics of Bengal were noted for their fineness of texture, beauty of design, intricacy of weave, lightness of weight, and durability. Tantis however, produced many different types of clothes of daily use and most of them were coarse and cheap. The finer clothes are now rare in a tanti's workshop and they survive in the profession by weaving largely the daily wears for the common people.

Once this group of craftsmen was under the domain of Hindu Caste System. During the late 19th century, a section of this population called Aswini Tanti ranked much higher than the others and a brahman would take water from their hands. In Western Bengal the Aswini Tanti or Asan Tanti claimed to be the original stock, from which the other sub castes have diverged. Women of this group did not wear nose-rings and this was regarded as a badge of social distinction. Ordinary tantis held low esteem. The origin of the caste was said to be from a shudra father and a ksatriya mother.

Tantis follow their profession as a hereditary one. In Bengal their popular titles were Barash, Basak, Bhedya-bau, Chand, Das, Datta, Jugi, Kar, Mandal, Mukhim, Nandi, Pal, Pramanik Sadhu, Sarkar, Shil etc each now represents individual family titles. The title Basak was originally taken by rich persons, who had later given up weaving and become cloth merchants. During the early 1920s, a group of tantis distinct from the city weavers and settled in Eastern Bengal claimed to be the descendants of the original tantis of Bengal, who supplied cotton fabrics for ages before the reign of Jahangir.

With the passage of time, the rapid growth of tantis in number followed the withering away of its caste character. During the Mughal period both Hindus and Muslims were involved in this occupation. duarte barbosa, a Portuguese traveler visiting Bengal in around 1518 mentioned in his writing some outstanding fabrics like memona, chowlari, cinebafa, and balilhar. In 1670, the east india company delivered a comprehensive detail of weaving in places of Bengal like Dhaka, Chittagong, Laxmipur, Kishoreganj and Bajitpur. Singham, kash, malmal, reshmi, nila and tofeta were the main forms of local fabrics.

Bengal textile industry began to decline from the beginning of the colonial rule. Textile of many varieties made the principal item of export trade of Bengal during the Mughal rule. The dominant status of textiles in export trade began to decline when England began to manufacture textiles soon after the Industrial Revolution. England imposed heavy duties on Bengal textiles and thus raising its prices in Britain. On the other hand Britain was exporting textiles to Bengal market duty free. Bengal textiles thus lost the world market. By the 1830s, Bengal lost her dominance in exporting textiles in the world market. From the 1850s, Bengal was turned into a market for British textiles. The main victims of British colonialism were the Tantis, who left textile manufacture for agriculture.

Tantis belong to both the Hindu and Muslim communities. But the name given to a Muslim tanti was Jola which he preferred not to be pronounced for him. Instead he called himself a karigar a skilled workman. Although tantis admit that weaving is their profession since time immemorial, many of them of late years do not have this as the exclusive occupation. The influx of cheap manufactured clothes forced many tantis to take other livelihoods as secondary sources of subsistence and many others, even to leave the occupation.

In the past, the spinning thread for handloom machines was made in the charka (spinning wheel) by means of a spindle. Now that thread is produced abundantly in machines, the charkas have become extinct. The cotton mills have nearly dealt a final blow to the occupation of weaving. Weavers at present produce mainly the coarse and cheap items of day to day use like the gamchhas (bathing towels), gangies (men's undergarment for the upper portion of the body), lungis (men's long skirts for day to day use), and saris.

Tantis live in the rural areas and their business is almost exclusively a family based one. In a village the tanti community resides in a demarcated location named Tantipara. Likewise, some places within the country are specialised in weaving and these are Narsingdi, Raipura, Demra, Tangail, Shahjadpur, Bera, Kumarkhali, Ruhitpur, Baburhat, Gouranadi and Nasirnagar. Regional varieties manifest variations in quality of fabrics produced in different areas. silk of Rajshahi, cotton sari of Tangail and Pabna, jamdani and katan of Mirpur, benarashi of Demra, and lungi-gamccha of Narsingdi earned countrywide reputation. These textiles are also being exported in large quantities. [Gofran Faroqi]