Tazumuddin Upazila (bhola district) area of 512.92 sq km, located in between 22°21' and 22°34' north latitudes and in between 90°47' and 91°01' east longitudes. It is bounded by daulatkhan upazila on the north, lalmohan, manpura upazilas and meghna river on the south, hatiya and ramgati upazilas and Meghna river on the east, burhanuddin upazila on the west.

Administration Tazumuddin Thana was formed on 28 August 1928 and it was turned into an upazila on 14 March 1983. 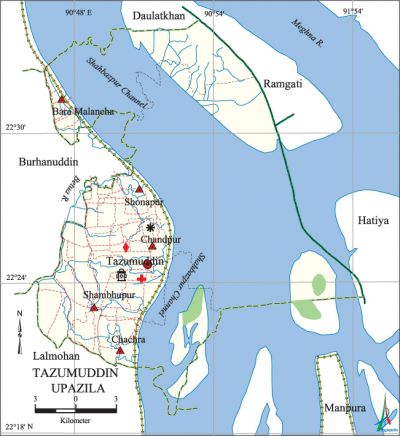 History of the War of Liberation In 1971 the Pak army conducted mass killing, plundering and burning in the upazila. During the war of liberation 7 freedom fighters were killed in this upazila in different encounters with the Pak army.