Tomb Architecture a type of building erected over the graves. The extant tombs in Bengal are small in number but show significant variety and interesting adaptation of the conventional Islamic form to regional tastes and requirements. As in other Muslim countries, hadith injunctions to practise taswiyat al-qubur, that is making the tomb level with the surrounding earth, did not prevent the raising of a grave above the ground level, erection of brick or stone cenotaphs, or the building of monumental mausoleums in Bengal. Architectural and epigraphic remains of the pre-Mughal and Mughal periods point to the burial places of three groups of people- conquerors and nobility, saints, and ghazis' (victors in religious wars). The Arabic word qabr is used for a grave; the Bengali word samadhi for a tomb; the Persian term mazar is an honorific appellation for the tomb of a person of high rank. Tombs of saints and ghazis, when attached to dargah complexes are called by the comprehensive term dargah; the Persian term astana for a holy tomb is not uncommon in Bengal. Funerary inscriptions contain such terms as maqbara, turba, qabr, gunbad, rawza.

Tombs in Bengal may be classified under two chronological periods: (i) Sultanate or pre-Mughal and (ii) Mughal. As in other Muslim buildings in Bengal, local Bengali tastes and techniques are more pronounced in pre-Mughal tombs, while preference for cosmopolitan Mughal style dominates Mughal funerary structures. Notwithstanding the survival of a number of detached funerary epigraphs, a systematic study of the tomb architecture in Bengal based on historical sequence is made difficult due to the fact that the majority of tombs in their present state are without inscriptions recording the name of the deceased or the date of the construction of the tomb. Local traditions are often relied upon to hypothesise the identity of a tomb, although internal evidence implicit in the technique and style of construction provides a stronger basis for establishing the authenticity of a burial place. 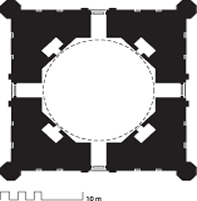 Burial places in Bengal range from open-air funerary enclosures without architectural covering over the grave to monumental mausoleums. Graves of some of the important saints in Bengal - shah jalal (R) at Sylhet, Alaul Haq (R) and Nur Qutbul Alam (R) at Chhoti Dargha, pandua, are in open enclosures and conform to the orthodox belief that 'only the pious deeds of the dead will offer him protection and shade'. The grave of baba adam shahid (R) at Rampal, Munshiganj, one of the earliest known Muslim saints in Bengal, was until recently without architectural covering. Among the tombs of the first ghazis, the mazar-madrasa complex at Tribeni, ascribed to Zafar Khan on the basis of two inscriptions dated 698 AH (1298 AD) and 713 AH (1313 AD), belongs to the category of open-air tombs. The tomb consists of two roofless square rooms raised on a stone plinth. This tomb is not only the earliest known Muslim monument in Bengal but also the earliest extant mausoleum in eastern India. The exquisitely carved black basalt sarcophagus at Mograpara (Sonargaon) near the Panch Pir Mazar has been ascribed to ghiyasuddin azam shah (1389-1411 AD). The ornament depicting lamps suspending from niches on the sides of the sarcophagus recalls lamp motifs in the mihrabs of the adina mosque built by Ghiyasuddin's father sikandar shah in 1373 AD; its furerary symbolism had already developed in the medieval tombs in Iran. Sikandar (d 1389 AD) himself is believed to have been buried in a nine-domed (now fallen) square chamber adjoining the north bay of Adina Mosque's west exterior.

The qubba or the domed cubic monument is the oldest and commonest type of tomb in Bengal as in other parts of the Muslim world. It existed in pre-Mughal and Mughal periods. The qubba at Imadpur, Bihar Sharif (India), identified as the tomb of the first Turkish conqueror of Bengal, bakhtiyar khalji (d 1206 AD), is dated to a later period on stylistic grounds by ZA Desai. The earliest extant qubba translated into regional Bengali form and also the first monumental tomb in Bengal is the eklakhi mausoleum at Pandua. This is believed to be the burial place of Sultan jalaluddin muhammad (d 1433 AD), his queen, and son, shamsuddin ahmad shah (fig-1).

The brick tomb chamber, externally square with curved cornice, the octagonal corner towers, and an entrance on each side, is internally converted into an octagon by thick brickwork left hollow at four corners to accommodate four small cells; the dome rests on squinches carried on embedded stone pillars. Once profusely embellished, the surface ornamentation bears traces of floral painting on plaster in the interior and variety of terracotta and glazed tiles on the exterior. 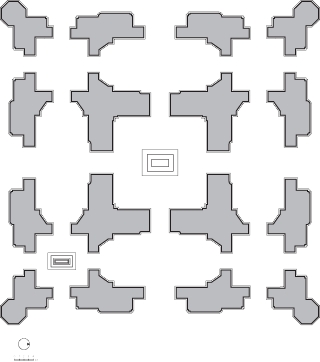 The Eklakhi style became a hallmark of Bengal architecture during the later Iliyas Shahi and Husain Shahi periods and persisted in the early Mughal period. Two inportant tombs in the Eklakhi tradition in Bangladesh are Khan Jahan's at Bagerhat dated 863 AH (1458 AD) and Badr Pir's at Chittagong. These tombs resemble each other in many ways. Though both are now shorn of their original surface embellishments as a protected monument, Khan Jahan's Tomb is in a better state of preservation and retains many of its original features. To accommodate the dome on the square tomb chamber, the phase of transition in both the tombs is achieved by squinches resting on brackets. The most distinctive feature of Khan Jahan's tomb is its lavishly inscribed sarcophagus. The tomb of Shah Safi (d. late thirteenth or early fourteenth century) in the dargah complex at Chhota Pandua (Hughli, West Bengal) in its present state is Mughal remodelling of a pre-Mughal curve-corniced qubba. The most important Mughal mounment in the Eklakhi tradition is the mausoleum of Bahram Saqqa at Burdwan who died during Akbar's reign in 970 AH (1562-3 AD). At Monghyr (Bihar, India) this tradition is echoed in the tomb of Shah Nafa, built in 903 AH (1497-8 AD) by Alauddin Hussain Shah's son, Prince Daniyal. No traces remain of Husain Shah's (d 1519 AD) black basalt sarcophagi, which survived until c 1846 AD or the tombs of later sultans at Banglakot at gaur.

The extant Mughal tombs are larger in number than the Sultanate tombs and show greater variety of form by exploiting the parent style. They are built singly, often in the vicinity of mosques, or within walled enclosure forming a small complex together with a mosque, or in larger complexes of religious and palatial buildings set within fortified gardens, e. g., the tombs of Bibi Pari in the lalbagh fort (Dhaka) and Anwar Shahid (Burdwan). Octagonal tomb appears for the first time in Bengal during the Mughal period. The qubba assumed its conventional exterior having a straight cornice. A group of qubba type tombs at Dhaka ascribed to the female members of Nawab Shaista Khan's household are delightful examples of funerary structures. The Mughal tombs are usually raised on platforms but sometimes panelled with blind niches. In addition to its basic form as a domed cube, during the Mughal period the qubba assumed two further forms, constituted by attaching (i) a verandah south of the square tomb chamber and (ii) an ambulatory consisting of a continuous verandah or chambers and passages round the tomb chamber. Representing the first type are two examples of note at Dhaka. The first tomb believed to be of Khwaja Shahbaz who, on the evidence of the inscription on the adjacent mosque, built the mosque in 1089 AH (1679 AD), is located at Ramna, Dhaka.

The tomb and the mosque form a complex within a walled enclosure entered through a gateway on the southeast. The other tomb, ascribed to Dara Begum, is now without any grave. It has been incorporated as a prayer chamber of the Lalmatia Jami Mosque; the mihrab on the west wall of the original tomb chamber facilitated this conversion. The architectural scheme of the second type finds a prototype in the tomb of I’timad al-Daula erected by Nurjahan at Agra between c 1622-28 AD. Compared to the simple qubba layout, its elaborate plan rendered this type exclusive.

In Bengal there are four outstanding examples of this type: (i) the tomb of Shah Niamatullah (d second half of the seventeeth century) at Firuzpur, Gaur, (Bangladesh part), ascribed to the patronage of shah shuja (AD 1639-60); (ii) tomb of bibi pari at Lalbagh, Dhaka (fig-2) and (iii) tomb of Bibi Mariam in Dhaka (fig-3); and (iv) tomb of Bakht Huma at rajmahal, attributed to the patronage of Shaista Khan and dated to the late seventeenth century.

The last expample of this type in Bengal is the tomb at Khushbagh, Murshidabad where lie buried alivardi khan and sirajuddaula with other members of their family. This type presents interesting variations in design - the tombs of Niamatullah and Bibi Mariam have verandahs for ambulatories; Bibi Pari's and Bakht Huma's tombs have passages on sides and chambers on corners. Again, the tombs of Niamatullah, Bibi Pari and Bakht Huma have three arch openings and that of Bibi Mariam has five arch openings on each of the four sides. In the context of the universal use of brick in Bengal architecture, Bibi Pari's tomb is unique for its extensive use of specially imported marble from Jaipur, black basalt from Gaya, and grey sandstone from Chunar for the interior. 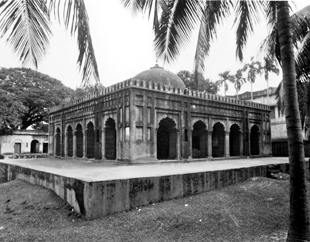 The architectural adaptation of a simple Bengali hut with its dochala or chauchala roof became a significant tomb type in seventeenth century Bengal architecture. Like the Eklakhi style, it was not confined to funerary buildings, but gained popularity in various forms of structures. A notable example is the tomb of Fath Khan at Gaur where a plastered brick structure, having a dochala roof over a single rectangular tomb chamber with entrances on the south and west, is built in the walled compound of the kadam rasul shrine. Another good example of the dochala type is the side chambers attached to the square tomb chamber of Anwar Shahid in Burdwan. The chauchala roof used in Mughal tombs in Bengal does not present the true Bengali chauchala form; it is, what Dani calls a 'segmented square roof' of the type used in I'timad al-Daula'a tomb. One of the earliest examples of this type was the supposed tomb of Islam Khan Chishti (d 1613 AD), now reconstructed beyond recognition, in the Dhaka High Court compound. In Chittagong, the tomb next to the Bagh-i Hamza Mosque is a good example of this type. The chauchala roofs in Ibrahim Danishmand's tomb complex at Mograpara are interesting interpretations of a Sultani feature. Remains of a double-storeyed tomb at Arifil, Brahmanbaria, containing two graves in the basement and two corresponding cenotaphs in the upper storey recall in a modest form the arrangement in I'timad al-Daul's tomb. The remains of two octagonal tombs at Nauda (Rajshahi) and at Burhanpur (Rajmahal) in their pavilion-like look and surface treatment adhere to the model of the octagonal tomb set under Shahjahan.

Tombs of the nawabs of Murshidabad during the eighteenth century reflect their predilections. The humble burial place of murshid quli khan beneath the entrance portal of his katra mosque (Murshidabad) consists of a small cell with a grave covered with clay, fulfilling his last wish that “the dust of the worshippers’ feet might fall upon his breast." Alivardi Khan wished to be buried in his much-loved garden, Khushbagh. mir jafar lies buried at Jafarganj graveyard amidst a thousand open-air graves.

The veneration of the dead in Bengal and the creative genius of modern Bengali builders have yielded some outstanding examples of tomb architecture in Bangladesh. The Tin Netar Mazar in Dhaka marking the burial place of the three pre-Liberation Bengali political leaders - ak fazlul huq, khwaja nazimuddin and huseyn shaheed suhrawardy - is both structurally and aesthetically an appealing interpretation of the traditional Islamic architecture motif of arch. The tombs of Poet Nazrul Islam and President Ziaur Rahman at Dhaka are notable examples of modern open-air tombs in Bangladesh. [Asma Serajuddin]