Algae primitive group of autotrophic plants, ie chlorophyll-bearing plants, which originated in sea water more than three billion years ago. From that early period algae diversified from the prokaryotic to eukaryotic forms and exclusively dominated the sea water up to the early Paleozoic era ie about 500 million years ago. These organisms possess a simple structure and the body is not differentiated into root, stem and leaves.

The algae are ubiquitous and many of them are cosmopolitan. They are primarily aquatic and can grow in freshwater habitats (ponds, ditches, lakes, rice-fields, rivers, beels, haors), on or under the soil surface (terrestrial) and on other substrates like tree trunks, walls of buildings, rock and stones, tins, metallic poles, etc (subaerial). Algae are also distributed in the brackish water habitats such as in the estuarine saline region of the sundarbans; and in the marine habitats. 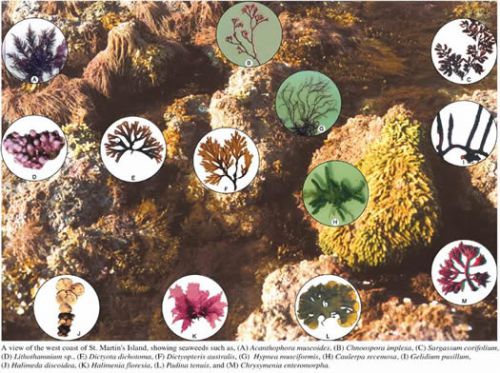 In Bangladesh a large number of algal species occur in freshwater, brackish water and marine habitats. All these include both benthic and phytoplankton members of the Cyanophyceae, Chlorophyceae, Charophyceae, Euglenophyceae, Rhodophyceae, Bacillariophyceae, Chrysophyceae, Xanthophyceae and Chloromonadinae. These include, besides aquatic forms, terrestrial as well as subaerial members.

Subaerial algae Bangladesh being a humid tropical country, profuse growth of subaerial algae on tree trunks, walls of buildings, and on other substrates are noticed. Most of the brick buildings, mosques, walls, monuments, etc in Bangladesh, particularly the white washed ones become dark, black or pinkish-reddish due to the growth of some blue-green algae like the species of Scytonema, Porphyrosiphon or greenish in colour due to the growth of Chlorella, Hormidium, Stichococcus, Cladophorella species or greenish-yellow to orange-yellowish in colour due to the growth of Trentepholia species. Tree barks could be variously coloured due to these algal growth. Thick slimy growths of Chroothece, Chrococcus or other blue-green algae are common in the rainy months.

Algae grow everywhere in Bangladesh and their presence is most spectacular, specially in the rainy months when buildings and other structures are discoloured by their growth. The footpaths and the grounds often become very slippery because of the growth of various blue-green algae. In different seasons the water surface of many ponds all over Bangladesh become reddish in colour due to the heavy growth of some Euglena species. Almost all the stagnant permanent water bodies in Bangladesh appear deep bluish-green or deep green in colour due to water-bloom formation by either various blue-green algae like several Microcystis species or several species of Euglena or Gonium, Eudorina and Pandorina. Some shallow pond water may appear reddish tea colour due to the heavy growth of Trachelomonas species. Roadside open drains in Bangladesh are invariably covered with a dark-greenish growth of Oscillatoria, Lyngbya or some other blue-green algae. [AKM Nurul Islam]

Blue-green Algae (BGA) These appeared on the earth's surface more than 3 billion years ago. Before the origin of BGA the earth's atmosphere was without any free oxygen. The latter started accumulating in the atmosphere after the BGA cells began to photosynthesize. All BGA are prokaryotic, ie they lack true nucleus, nucleolus and nuclear membrane in their cells. They also lack plastids, flagella, and the sexual mode of reproduction. But somatic fusion of nuclear materials, a kind of genetic recombination known as parasexuality is present in some species.

BGA could be unicellular, free-living, planktonic or attached; some form regular or irregular colonies; many are multicellular filaments, with or without branches; some may form false branches. Multiplication of these organisms may be through cell-division, fragmentation, hormogone-formation, multicellular hormospores, or microspores, nannospores, endospores, akinetes, or by heterocysts.

A large number of genera and species of BGA have been recorded in Bangladesh from the subaerial, terrestrial and aquatic (lakes, ponds, ditches, rice-fields, rivers, estuaries, and marine) habitats.

In Bangladesh most of the ponds, ditches and other stagnant waters are organically polluted, allowing the BGA to form water-blooms when the waters appear bluish-green, that may persist almost throughout the year. The common species are Microcystis flos-aquae and M. aeruginosa. These make the waters unsuitable for fish growth, recreation, and for domestic uses. The death and decay of these cells produce a disagreeable odour and taste. Due to overgrowth, these algae may deplete the oxygen content of the water, which may cause death of fish. This water-bloom is also a health hazard for human beings. Below some important examples of BGA are given from different ecological habitats of Bangladesh:

Subaerial BGA Most common members are the species of Scytonema, Tolypothrix, Porphyrosiphon, Stigonema, Symploca, Myxosarcina, Chroococcus, etc. In Bangladesh wherever tree trunks, buildings, mosques, or other structures are found with a blackish, or pinkish/reddish colouration, it is invariably due to the growth of the species of the above genera.

Aquatic Many species of the BGA are abundantly grown in all kinds of aquatic habitats (freshwater, brackishwater and marine) in Bangladesh. Many species are planktonic and some form spectacular water-blooms in organically polluted waters, eg Microcystis, Aphanocapsa, Aphnothece, Chroococcus, Synechocystis, Synechococcus, Gloeocapsa, Gloeothece, Merismopedia, Coelosphaerium, etc (all these are unicellular, mostly colonial). Multicellular planktonic forms are also found, eg, Anabaena, Nostoc, Spirulina, Oscillatoria, Lyngbya, Anabaenopsis, Wollea, Rivularia, Gloeotrichia, etc. Among the attached or entangled forms the species of Stichosiphon, Calothrix, Scytonema, Tolypothrix, Hapalosiphon, Stigonema, Lyngbya, Hydrocoleum, Fremyella, Nodularia, and Aulosira can be mentioned. In the southern brackishwater habitats the species of Spirulina and Anabaenopsis are more abundant than in the freshwater areas. The species of Jahanesbaptistia has been recorded so far only from the brackish water shrimp culture ponds at khulna and satkhira.

Some BGA species are found inside the higher plants like Anthoceros, liverworts, Azolla and Cycas. For example, Anabaena azollae is endophytic within the thallus of the floating aquatic fern Azolla pinnata; Nostoc grows within the root of Cycas to produce coralloid root. Several species of BGA (Chroococcus, Gloeocapsa, Nostoc, Scytonema, Stigonema, etc) in symbiotic association with fungal cells produce lichens, which are very important for various purposes. Members of Oscillatoriaceae are true parasites which live within the digestive tract of man and other animals. BGA growing within the protoplast of cells of rhizopods, cryptomonads, diatoms, Tetrasporales, Chlorococcales, and Phycomycetes are cases of helotism or endophytism. Except diatoms, all the hosts are colourless. Glaucocystis nostochinearum is one such example of endophytism found in Bangladesh.

Some experimental studies with the BGA in Bangladesh GA have many characteristic features similar to true bacteria and for this reason these are now classified by many with the bacteria and are called cyanobacteria. One of the bacterial features is fixation of the atmospheric nitrogen to soil and water, particularly in tropical countries. This N2-fixation ability of the BGA was first proved experimentally and conclusively by Dr PK De of the University of Dhaka in 1939 with the soil BGA collected from faridpur rice-fields. Agriculturally, this information is very important and nowadays various BGA are used as biofertilisers to improve soil-fertility in tropical Asia, Africa and Latin American countries.

Spirulina species are now considered 'wonder organisms', the cells of which have the highest protein content (about 70%) among living species. These cells also contain various vitamins, mineral salts and other products.

Azolla pinnata, an aquatic fern, grows abundantly in Bangladesh. Within its thallus resides a blue-green alga Anabaena azollae, which is capable of fixing atmospheric nitrogen. For this reason, efforts are being made to use Azolla as a biofertiliser in crop fields. [AKM Nurul Islam]

Brackish Water Algae Species of algae that grow in waters having salinity less than that of sea water, usually below 33 and above 10 ppm. The salinity of the brackish water areas is variable, depending on the tide, the amount of freshwater entering from rivers, rainfall, and the rate of evaporation. Some algae like Enteromorpha are remarkably tolerant to varying salinities. These algae live on ships that ply both freshwater and oceans.

In Bangladesh, the Sundarbans area is an important brackish water habitat ie mangrove swamp which stretches from Raimangal river on the west to Baleswar river on the east. This forest presents a unique environmental combination of rivers and tidal creeks, fresh and saline waters, fine sediments and tidal muds, and low-height levees flanked by a few centimeters deep depressions. This is a low-lying delta and is the world's largest single tract tidal mangrove forest, situated between 21'30' and 22'30'N latitudes and 89' and 90'E longitudes, south of the tropic of cancer and at the northern terminus of the bay of bengal. Brackish water habitats are also available in the estuaries in chakaria sundarbans, maheshkhali, teknaf, patuakhali, and bagerhat.

Marine Algae Chlorophyll-bearing plants growing in the seas and oceans. The seaweeds or plants that remain attached to the bottom of the sea are almost all algae. There are microscopic algae as well, which float in water as phytoplankton.

'Seaweeds' need a hard or rocky substratum for growth and development. That is why in Bangladesh territorial waters seaweeds are found only around st martin's island. They grow abundantly in winter and spring. Growth is affected by rainwater runoff. The supra-tidal zone or splash zone of the benthic marine environment is dominated by blue-greens (Cyanophyta= Cyanobacteria) such as Calothrix. In the inter-tidal and sub-tidal zones, brown (Phaeophyta), red (Rhodophyta) and green (Chlorophyta) algae dominate. Among the greens several species of Caulerpa are common in addition to Enteromorpha. Calcified algae include greens (eg Halimeda opuntia) and reds (eg Galaxaura, Lithothamnium sp.). Species of Sargassum, Padina, Dictyota etc are abundant among the brown algae in St Martin's Island. In cold waters Fucus species and Laminaria species commonly called 'kelps' dominate. Some filamentous, foliaceous and profusely branched red algae are common constituents of 'seaweeds' in St Martin's Island.

Marine phytoplankton is dominated (sometimes >90%) by diatoms (Bacillariophyta) followed by dinoflagellates (Dinophyta) and blue-greens. The later two groups sometimes grow in huge numbers giving to the water a characteristic colour called algal blooms eg red-tide caused by Gymnodinium brevis and Gonyaulux catenella, and red-sea caused by Trichodesmium erythraeum. They release toxic substances causing death of fish, other aquatic animals and even humans, if eaten. Noctiluca miliaris is a luminescent dinoflagellate. The density and diversity of phytoplankton is higher in the neritic zone than the oceanic areas.

The brown and red algal cell wall extracts are constituents of many essential commodities. Alginic acid extracted from brown algae (mainly from Laminaria) is used in making ice cream and other dairy products, paints and rubber. Until the discovery of mineral deposits of iodine, kelps were the only source (15 kg per ton) of iodine, which is both a preventive and cure for goitre. The cell walls of some red algae contain agar and carrageenan.

The agar is used in food preparations (mayonnaise, pudding, creams and jellies), pharmaceutical industries (in laxatives, ointments etc) and in pathology and bacteriology laboratories. Carrageenan's use is similar to agar but its most extensive use is in paints, cosmetics such as lipsticks, dairy products such as ice cream, and for making instant pudding, sauces and creams. In Japan and China brown algae, especially members of Liminariales are used as vegetable food (named as kombu in Japan and haidai in China).

Some foliacious red algae, such as Porphyra, rich in protein and vitamins, are eaten as a vegetable called nori in Japan, laver in Nova Scotia and zhi chai in China. St Martin's Island has some edible marine algae, but quantitatively they are not exploitable. Often the fishermen after drying the cartilaginous algae collected from the beach during low tide in the St Martin's Island consume those as vegetable. Productivity of fish in the sea is also directly related to phytoplankton productivity. [Abdul Aziz]