Administration Bakshiganj Thana was formed on 30 April 1982 and it was turned into an upazila on 14 September 1983. 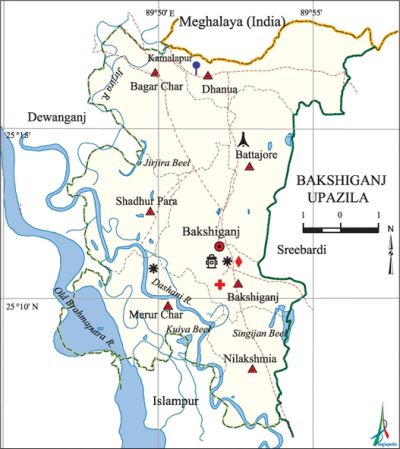 History of the War of Liberation During the' war of liberation in 1971 the freedom fighters attacked Kamalpur Pak army camp a number of times crossing the Indian border and coming through Bakshiganj upazila. On 31 July 1971 the freedom fighters, under the command of Major Moinul Hussain Chowdhury (Battalion Commanding Officer of the 1st East Bengal Regiment of Sector 11) attacked the Kamalpur Pak army camp with heavy casualty on the enemy side. During the War 35 freedom fighters including Captain Salahuddin Momtaz, Ahaduzzaman and Abul Kalam Azad were killed in encounters with the Pak army. Col. Abu Taher got seriously wounded by explosion on 14 November 1971 in an encounter with the Pak army. Bakshiganj Upazila was liberated on 5 December 1971.

Hats, bazars and fairs Hats and bazars are 10, fairs 4, most noted of which are Nayim Miar Hat, Kamalpur Bazar and Sarmara Austami Mela, Battajore Akhra Mela and Shah Kamal (R) Mela at Kamalpur.

Natural disasters There were heavy damages to settlements, livestock and crops due to earth quake of 1930 and floods of 1931 and 1988.