Sreebardi Upazila (sherpur district) area 270.34 sq km, located in between 25°03' and 25°18' north latitudes and in between 89°53' and 90°03' east longitudes. It is bounded by Meghalaya state of India on the north, sherpur sadar upazila on the south, jhenaigati upazila on the east, bakshiganj and islampur upazila on the west.

Administration Sreebardi Thana, now an upazila, was formed on 31 March 1918. Sreebardi Municipality was formed in 24 September 2004. 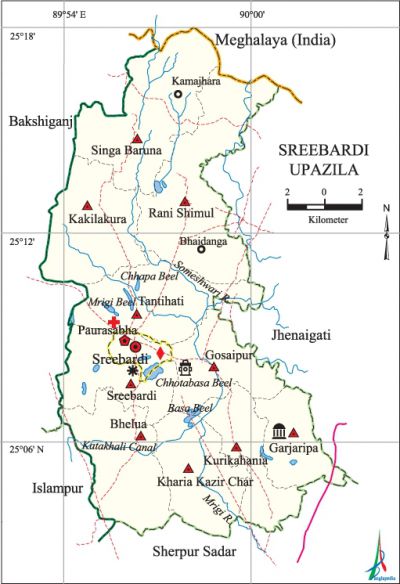 History of the War of Liberation Sreebardi upazila was under Sector 11 of the war of liberation in 1971. Eleven freedom fighters including Shah Motasim Billah Khurram, Commander Zahurul Hoque Munshi, Dr. Abdullah Al Mahmud, Abdus Salam were killed in different encounters in the upazila during this time. The Pak army conducted mass killing and heavy plundering; they also set many houses of the upazila on fire. Sreebardi upazila was liberated on 6 December.

Marks of the War of Liberation Mass grave 1 (CSD Godown).

Natural disasters A large number of people were victims of the famine, cholera and small pox of 1943. Besides, the floods of 1942 and 1988 caused heavy damages to settlements, livestock, crops and other properties of the upazila.