Bengal Delta two Himalayan rivers, the ganges and the brahmaputra, which drain to the bay of bengal as a combined river, carry the largest sediment load. These two rivers together with another non-Himalayan river, the meghna, have built one of the largest delta in the world known as the Ganges-Brahmaputra Delta or the Bengal Delta. On its northeastward migration, the Ganges built several deltas and then abandoned them before finally occupying its present position. The Brahmaputra had an eastward course as revealed by rennell’s atlas, building the early Brahmaputra delta near Mymensingh. At present the river has a straight southward course. However, while these two rivers previously debouched individually to the Bay of Bengal, at present they combine before finally emptying into the bay. These delta building activities of the rivers contributed to the formation of some 60% of the total Bangladesh coastline. 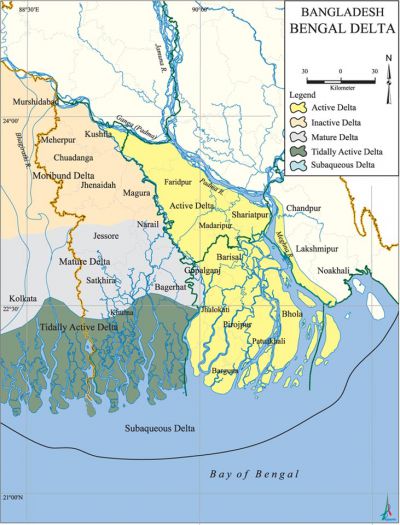 The Ganges-Brahmaputra delta is one of the physiographic units of Bangladesh. The area is almost plainland where the elevation ranges from 15m in the north to nearly a metre in the south. The gradient of the delta surface is about 0.016m/km. The average elevation of the delta in Khulna, Barisal, the southern part of Faridpur and the eastern part of Noakhali district is less than 2m. The delta areas of Bangladesh are densely populated, with a predominance of agricultural activities due to the high fertility of the soils. The livelihood of most people depends on the environmental conditions of the delta, in terms of land cultivation, fishing, navigation, common property resources (eg from the sundarbans mangrove forest), and other economic activities. Continual land accretion and erosion in this large and constantly evolving delta influences the population, settlement pattern and the socio-cultural fabric of Bangladesh.

Evolution The development of the Ganges-Brahmaputra delta that began some 125 million years ago (Ma) after the fragmentation of the Gondwanaland since the early Cretaceous is still continuing. The history of the delta complex can be understood in terms of Gondwanaland break-up, Indian plate movement, collision of the Indian plate with the Burmese and Eurasian plate, development of the huge mountain range of the himalayas, development of the Ganges-Brahmaputra river system and sea level changes in several historical periods and tectonic activities over millions of years.

The development of the delta complex started in the right passive margin of the Indian plate when the rate of sedimentation was very slow. With the northward drifting of the Indian plate and the collision with the Eurasian plate the delta complex received huge sediments that evolved into three stages of development - the proto-delta, the transitional delta and the modern delta. However, the delta building activities worked rigorously during the Tertiary and the Quaternary periods of the Cenozoic Era.

The transitional delta (49.5-10.5 Ma) Passed dramatic consequences of the collision between the Indian plate and the Eurasian plate and the subsequent rise of the greater Himalayas. The clastic sediment may be equivalent to the Kopili Formation and the bengal deep sea fan that began to accumulate during this stage as turbidity currents carried the increased sediment load into deeper water.

Modern delta (10.5 Ma - present) The delta began to adopt its modern form at about 10.5 Ma, following a major eustatic sea level fall that resulted in considerable erosion of earlier depositional sequences. The delta has continued to grow in a relatively stable tide dominated environment. The influence of the Ganges began to dominate the deposition system. Neotectonic activity and Quaternary sea level fluctuation largely control the development of deltaic arcs in Bengal Basin. Delta building activity by the existing rivers continued throughout the Quaternary and pushed the shoreline towards east and southeast. Due to continuous upliftment of this region, each younger formation was deposited further seaward than the preceding one, leaving a portion of the latter uncovered by the younger one. The Early Pleistocene, with its high sea level, is marked by a zone of small deltas around the inner boundary of the basin. Each time the sea level dropped there was deep dissection of the unconsolidated delta sediments. In a glacial stage, the sea level was extended and the rivers were in the progradational or valley cutting stage.

As the delta is tide dominated with strong fluvial influence, the sediments were deposited more in the sea floor rather than redistributed by ocean waves and currents. As a consequence, the depositional plain rose. In the next interglacial stage, with rising sea level, the rivers were in the degradational or valley filling stage. At this time the river processes subducted by ocean processes, more deposition occurs at the river mouth. In both cases the delta building activity progressed directly or indirectly. It is obvious that the highly dynamic nature of the Meghna deltaic plain is the result of interaction between the two strong opposing agents of delta-building activities, fluvial and marine processes. While the fluvial processes are huge seasonal fluxes of water and sediment, the primary marine process is a semidiurnal tide with strong fortnightly variation. While the morphologic changes of sandwip Island and adjacent areas are primarily the result of strong tidal currents, the same changes of the bhola Island are primarily the result of river currents.

Therefore, the erosion at Bhola is highly seasonal. hatiya Island and adjacent areas have the influences of both the tide and river flux, yet in some areas, such as the morphologic changes of Urirchar the development is dependent on the tidal meeting dynamics, which are dominated by the amplitude and phase differences between the two tides coming through the Hatiya and Sandwip channels. Three of the four deltaic arcs in West Bengal are equivalent to the three deltaic arcs in Bangladesh. The arcs in West Bengal are: Recent Deltaic Plain, Younger Deltaic Plain, Older Deltaic Plain and Laterite Upland and the equivalent arcs of the first three are the Sundarban (Recent Ganges-Brahmaputra delta), Chandina Deltaic Plain (Early Ganges-Brahmaputra-Meghna Delta), the Barind-Madhupur Tract, respectively. [Sifatul Quader Chowdhury and M Qumrul Hassan]