Biman Bangladesh Airlines Limited national flag carrier in the air-line. It was established as a corporate body called Bangladesh Biman Corporation under the Bangladesh Biman Ordinance (Presidential Order No. 126) of 4 January 1972. BBA was converted to public private company in July 2007, though the hundred percent ownership of its still in hand of government. 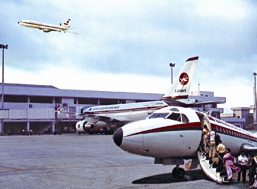 Most of Biman's destinations are served with either direct or single stop service. Convenient transfer connections from Dhaka to regional destinations like Calcutta, Kathmandu and Yangon are easily available.

Biman has its own ancillary and maintenance facilities including the Biman flight catering centre, Biman engineering hanger, Bangladesh Airline Training Centre, and the Biman Poultry Complex. The airline reservation system, departure control, and other communications systems are fully computerised. Experienced ground handling units service Biman's own aircrafts as well as those of a number of Foreign Airlines at the International Airport at Dhaka. [Syed Mohd Saleh Uddin]