Birganj Upazila (dinajpur district) area 413 sq km, located in between 25°48' and 26°04' north latitudes and in between 88°29' and 88°44' east longitudes. It is bounded by thakurgaon sadar and debiganj upazilas on the north, kaharole upazila on the south, Atrai river and khansama upazila on the east, bochaganj, pirganj (rangpur), Thakurgaon Sadar upazilas on the west.

Administration Birganj Thana was formed in 1890 and it was turned into an upazila in 1983. ' 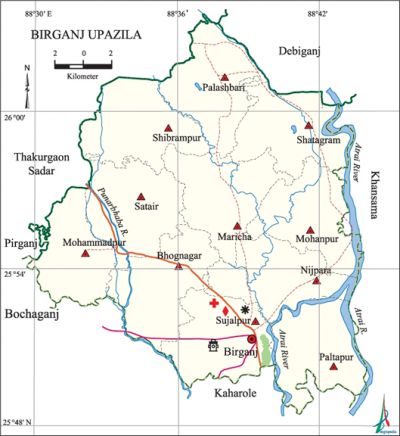 Hats, bazars and fairs Hats and bazars are 50, fairs 6, most noted of which are Gopalganj Hat and Dhemdhemedia Kali Mela.