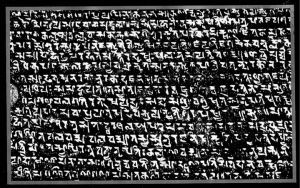 The copperplate named 'Irda' and scribed in the later part of the 10th century AD is regarded as the oldest document in Bangla language. It was discovered in 1931 AD in the district of Balashore of orissa. The inscription has 49 long lines that introduce a royal lineage or a local cult. The main theme of the writing is 'Kamboja-vamsa-tilaka' i.e. glorification of the 'Kamboja' cult. Besides, the king Nayapala who was a member of the family of Rajyapala did it to certify the allocation of a land at dandabhukti mandala under Bardhamanbhukti. Undoubtedly the text was inscribed during the rule of Kambojapala lineage. Kambojapala royalty ruled the north-west Bengal from 10th-11th Centuries AD. But there are no sources yet about the spread of the kingdom. According to the description of Irda copperplates, the kingdom was situated at Dandabhukti Mandala (a part of South and South-West Medinipur and in the district of Balashore at the downstream of the river Shubornorekha) under Bardhmanbhukti Mandala (the present day Bardhaman division under West Bengal of India). Gouda and Rada were also parts of Kambojapala kingdom. The last of the Kamboj rulers was Dharmapala (not related to Dharmapal of Pala dynasty) who ruled Dandabhukti till the beginning of 11th century AD.

Irda copperplate introduces three rulers of Kamboja dynasty, the founder of the dynasty Rajyapala and his two sons Narayanpala and Nayapala. Irda copperplate was inscribed during the rule of Nayapala and in the inscription 'Paramexwara', 'Parambhottacharya' and 'Maharajadhiraj' titles were used for both him and his father.

It may be mentioned that the names of some rulers and the duration of their rule, of both Kambojpal dynasty and Pal dynasty of Bengal seem to be somewhat similar. Rajyapala as mentioned in Irda copperplate was a contemporary of Rajyopal II of Pal dynasty. Both had the similar royal titles i.e. 'Parameswar', 'Parambhottacharjo' and 'Maharajadhiraj' and added 'Pala' as title at the end of their names. They had same religious belief. It is to be noted that the rulers of Kambojpal dynasty hailed from the hilly areas of north, outside Bengal; and they captured different areas of North and West Bengal from the Pala rulers. Later, Mohipala II occupied the region and re-established Pala dynasty.

A notable bit of information found in the Irda copperplate is that the Kamboj king seated in Bengal was the Commander in Chief of his Army while there was more than one Army Chief. All of them were recruited by the king and would come to help run the dynasty with assistance from a guild of reserve army troop leaders. In Kautiliya's 'Arthaxastra' also, there are informations on this guild of reserve army troop leaders as 'Khatriya Shangho' or the guild of fighters. At Balashore of Orissa, another copperplate 'Kalanda Tamroshashon' of the Kamboj of the Bengal has been found. It was named after the village 'Kalanda ' where it was found. The copperplate was inscribed during the rule of Kamboja King Noypal at his capital Priyongu in the month of axhwin of the fourteenth regnal year of his rule. But the location of the capital Priyongu is yet to be known.

According to the copperplate 'Bhaturia tamroshashon' of the King Rajyapala, people of anga, Kalinga, Orissa or Ora, Kornat, Sumhma, Gurjara, Kirat and China were under his rule. But Gouda was beyond his jurisdiction. 'Bhaturia tamroshashon' is regarded as third important copperplate of the Kamboja dynasty. The 'Bangad tamroshashon' or 'Bangar tamroshashon' of Mohipal-I is regarded as a very important copperplate in the history of Bengal. It was a document of reinstatement of the Pala dynasty of Bengal. He re-established the Pala rule in the northern and western parts of Bengal. But he could not capture the southern part of West Bengal. Dharmapal and Ranasur ruled that area when Rajendra Chola attacked it. Only about the end of his rule, Mohipal could bring the norhtern part of Bengal under his rule. From the copperplate 'Saranath tamroshashon' (inscribe in 1083 Shambat i.e. 1026 AD) it is assumed that the King Mohipal 1 was able to expand the kingdom up to Benaras. But this copperplate from Benaras was inscribed for religious reasons which depicts that Mohipal was a follower of buddhism and involved himself in repairing and constructing a good number of Buddhist temples. Experts opine that this copperplate had no relation with Mohipal's governance at Saranath.

Another inscribed document is the copperplate 'Pashchimbanga tamroshashon' or 'Sylhet tamroshashon' of King Sree Chandra during the rule of Kamboj dynasty in Bengal. King Sree Chandra (925-975 AD) of Chandra dynasty decreed this Tamroshashon. In this copperplate, 'Debparbata' is mentioned as the area on the bank of the river 'Khiroda' of Samatata. It also depicts the victory of King Troilokkochandra (905-925 AD), father of King Sree Chandra over the Kamboja. This copperplate was decoded and translated into English by ahmed hasan dani. It is clear from the coppreplate the Kamboj soldiers from Lalmai forestry attacked the Samatata region but King Troilokkochandra of Chandra dynasty overpowered them and protected Lalambee.

So far, twelve copperplates have been discovered at Charpatra Mura of Comilla and other areas. The copperplates found from shalvan vihara were inscribed during the rule of independent rulers of deva dynasty. The copperplates present four rulers of Deva dynasty - Sri Shanti Deva, his son Sri veer Deva and veer's two sons - Sri Anando Deva and Sri Bhaba Deva. The copperplates of Deva dynasty also maintained the fashion of having' a stamp along with the inscribed information. The stamp had the title of the ruler as 'Sri Bangla Mrigankashwar'. The style of the script in the coppperplates was later version of Nagari which was similar to the script of Gupta era. Three of the four copperplates found at charpatra mura belong to the kings of the Chandra dynasty of South-East Bengal. All their copperplates were decreed from their capital Bikrampur. Out of three copperplates, the first two were decreed by the King Ladaha Chandra, the sixth ruler of Chandra dynasty while the third one was by his son King Gobinda Chandra. The lineage of Chandra dynasty, their political status, their relationship with neigbouring kingdoms on the north - the Pal dynasty in particular, and different army invasions etc. were depicted on all these copperplates. The copperplate of 5th century AD of Gupta era, which was found along with other archaeological artifacts during the excavation of the base of the Buddhist temple of paharpur monastery (Somapura Mahavihara), is a remarkable document. It was to apprise about the allocation of a land to a Brahmin couple who were responsible for the maintenance of the monastery. In this copperplate a place called Batagohali was mentioned, which was also seen in the Boigram copperplate of Dinajpur. According to the tamroshashons, a Jain teacher named Guhanandi used to head the monastery.

The Boigram copperplate decreed in 128 Gupta year or 448 AD, was 31 year older than Paharpur copperplates. Boigram is situated at 32 kilometers to the north of Paharpur. Both the places were mentioned in this copperplate. It is assumed that Boigram and Batagohali - the two villages, had good rapport between them. It was also assumed that due to deterioration of law and order situation in Bengal, Jainism became extinct and the Guhanandi monastery of Batagohali village had the same fate. In 8th century AD, when the Pala rulers started Pala era, the great somapura mahavihara was built at the place of Guhanandi monastery and the Buddhist monks of the Sompur were handed over the copperplate that was previously decreed for the Jaina monastery. That was why the copperplate was found at Paharpur.

In 156 Gupta year or 476 AD and 163 Gupta year or 482 AD King Buddha Gupta Deva decreed two copperplates. Both were found in the Koh (modern city-state) village. Both the copperplates give information about the sovereignty of Gupta kings. One of them focuses on the political history and the rule of the Guptas. According to the copperplate, Gupta rulers were united and had stable governance in Pundrabardhana or northern part of Bengal. The Gunaigarh tamroshashon of Vainya Gupta from Comilla of East Bengal depicts that the King Vainya Gupta donated a land in Tripura, previously conquered by him, to his employee Maharaja Rudra Dutta to maintain a Buddhist monastery at north mandala. It also says that Vijaya Gupta was the ruler of Bhukti at North Mandala in 188 Gupta year/ 507 AD. The name of Maharaja Vijaya Gupta was very clearly inscribed in the royal seal. [Nasrin Akhter]