Baul a mendicant folk sect, generally inhabiting the districts of kushtia, meherpur, chuadanga, jhenaidah, faridpur, jessore, and pabna and associated with devotional songs known as Baul songs. Bauls practice secret devotional rites, centering on the belief that the human body is the seat of all truths. In this there is a fusion of the sahajiya and Sufi concepts of devotion with sufism enjoying some predominance. Bauls do not believe in organised religion and do not frequent mosques or temples. They are iconoclasts and humanists who believe that all human beings are equal, irrespective of caste and creed. One is not born a Baul, but becomes one, after initiation by a guru. While there are some ascetics Bauls, there are no restrictions on men and women living together. In fact, certain Baul rites are based on the combined devotional practices of a man and a woman. Little is known about when the sect originated or of the origin of the word 'Baul'.

By the 15th century, however, the sect had made its appearance as is evident from the use of the term in Shah Muhammad Sagir's yusuf-zulekha, Maladhar Basu's srikrishnavijay, Bahram Khan's laily-majnu, and Krishnadas Kaviraj's Srichaitanyacharitamrita.

Regarding the origins of the sect, one recent theory suggests that Bauls are descendants of a branch of Sufism called ba'al. Votaries of this sect of Sufism in Iran, dating back to the 8th-9th centuries, were fond of music and participated in secret devotional practices based on sexual free-mixing. They used to roam about the desert singing. Like other Sufis, they also entered the South Asian subcontinent and spread out in various directions. It is also suggested that the term derives from the Sanskrit words vatul (mad, devoid of senses) and vyakul (wild, bewildered) which Bauls are often considered. 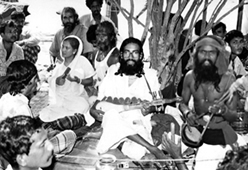 Like the ba’al who rejects family life and all ties and roams the desert, singing in search of his beloved, the Baul too wanders about searching for his maner manus (the ideal being). The madness of the Baul may be compared to the frenzy or intoxication of the Sufi diwana. Like the Sufi, the Baul searches for the divine beloved and finds him housed in the human body. Bauls call the beloved sain (lord), murshid (guide), or guru (preceptor), and it is in his search that they go ‘mad’.

There are two classes of Bauls: ascetic Bauls who reject family life and Bauls who live with their families. Ascetic Bauls renounce family life and society and survive on alms. They have no fixed dwelling place, but move from one akhda to another. Men wear white lungis and long, white tunics; women wear white saris. They carry a jhola or shoulder bag for alms. They do not beget or rear children. They are treated as jyante mara or outcastes. Women, dedicated to the service of ascetics, are known as sevadasis (seva, service+dasi, maidservant). A male Baul can have one or more sevadasis, who are associated with him in the act of devotion. Until 1976 the district of Kushtia had 252 ascetic Bauls. In 1982-83 the number rose to 905; in 2000, they numbered about 5,000.

Those who choose family life live with their wives, children and relations in a secluded part of a village. They do not mix freely with other members of the community. Unlike ascetic Bauls, their rituals are less strict. In order to become Bauls, they recite some mystic verses and observe certain rituals.

An ascetic Baul alone can initiate a person into the cult; the relation between the initiator and the initiate is similar to that between a pir and his murid or disciple. Once inducted into the cult, even non-ascetic Bauls are forbidden to have children, though some may do so with their guru's permission. Currently, the trend to become Bauls has been growing among farmers, weavers, and traders. Many of them are factory workers and day labourers. A sevadasi may leave one Baul and go away with another. The number of Bauls opting for domestic life is lately on the rise.

Bauls have ghars (literally, house, lineage) or guru-traditions. These ghars are named after the principal Baul gurus: Lalon Shahi, Panju Shahi, Delbar Shahi and Panchu Shahi. A special section of the Bauls is known as kartabhaja. They follow Vaisnava traditions and are known as sati mayer ghar. These ghars or gurudharas have some slight differences in devotional rites and music. In the Lalon Shahi tradition, for example, there is a predominance of Sufistic and tantric beliefs and sahajiya rituals, while in the Panju Shahi tradition, tantric beliefs and sahajiya practices are absent.

Ascetic Bauls have no settled homes, but take shelter in community houses called akhda. Akhdas are located at some distance from the rest of the village communities. Akhdas also grow up round abodes or graves of gurus. During the lifetime of lalon shah, there were akhdas of Baul fakirs in many parts of Bangladesh, especially at vikramapura, narsingdi, manikganj, sylhet, comilla, rangpur, nilphamari, Pabna, Faridpur, rajbari, Jessore, magura, Jhenaidah, Chuadanga, Meherpur and Kushtia. An akhda has grown up at Kulbere Harishpur village in Harinakunda upazila, Jhenaidah, near the grave of panju shah. Lalon Shah's akhda is located at Cheuria village in Kushtia. Devotees assemble at the akhdas and perform religious rites and sing Baul songs. There is an annual three-day festival at Cheuria during the full moon in Falgun, where sadhus are also entertained.

While Bauls have had many admirers, they have also been reviled by both Hindu and Muslim fundamentalists. Lalon Shah himself was a victim of this hatred. Among the reasons for this antipathy are the unorthodox beliefs and practices of the Bauls, particularly their sexual promiscuity.

Baul songs form an important genre of folk songs and are believed to date back to at least the 15th century. Famous Baul singers and poets include Lalon Shah, Panju Shah, Siraj Shah and duddu shah. These songs are also known in rural areas as dhuya gan or bhav sangit (devotional songs).

Baul songs are usually of two kinds: dainya and prabarta. These are also known as raga dainya and raga prabarta. These ragas are not the ragas of classical music but of bhajans (devotional songs). Baul songs are inspired by vaisnavism, with the songs expressing love or longing for the divine. This sentiment is especially noticeable in raga dainya.

Baul songs may be sung at Baul akhdas or in the open air. At akhdas, songs are sung in the style of hamd (song in praise of God), ghazal or nat (song in praise of the Prophet muhammad (Sm)), in a mellow voice and to a soft beat. Baul songs at open-air functions are sung at a high pitch, to the accompaniment of instruments such as the ektara, dugdugi, khamak, dholak, sarinda, and dotara. The common tals are dadra, kaharba, jhumur, ektal or jhanptal. The singers dance as they sing. Baul songs sung in the akhda are not accompanied by dancing. Bauls may present songs singly or in groups. There is usually one main presenter; others join him for a chorus or dhuya.

Baul songs generally have two tunes, one for the first part of the song and another for the second. Towards the end, part of the second stave is rendered again at a quick tempo. The first and middle staves are very important. The first stave is often called dhuya, mukh or mahada. In songs with a fast tempo, the first stave is repeated after every second stave. Some songs have ascending and descending rhythms, while others are accompanied by dancing, believed to have originated from the rural panchali.

Baul songs are elegiac in tone, reflecting the pain of deprivation or longing. They are inspired by the idea that the human body is the seat of all truths and by the search for a guru or maner manus. Every song may be interpreted in two ways: in terms of human love and in terms of divine love. Bauls refer to these two ways as the lower stream and the upper stream.

There are five gharanas of Baul songs, devolving from the well-known exponents of this genre: Lalon Shahi, Panju Shahi, Delbar Shahi, Ujal Shahi and Panchu Shahi. Although Baul songs come mainly from the region of Kushtia, singers of other regions bring in different influences particularly in tunes and style. At times even the words vary.

At times Baul songs reflect the influence of bhatiyali tunes. majhees (boatmen) also sing these songs while plying their boats in the rivers. Baul songs are not confined to Bauls, as non-Bauls too have adopted them because of their profound themes. During epidemics, villagers ask Bauls to sing and pray, believing that this will cleanse their village of pestilence. [Anwarul Karim]