Akhand, S'adat Ali (1899-1971) essayist, literateur. He was born on 1 July in 1899 at village Chingsapur under Kotwali Police Station of historic Mahasthangarh in Bogra district. 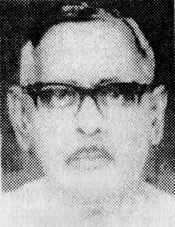 He did his matriculation in 1916 from Coronation School at Bogra, IA from St Xaviers College in Calcutta in 1918 and BA (Hons) from Rajshahi Government College in 1920. From 1920 to 1922 he worked as a school teacher at Bogra’s Sariakandi Narsi High School and at Mohimganj and Bagbari High Schools. He joined the Police Department towards the end of 1922. While serving in its Intelligence Branch in Calcutta, he got admitted in the Law College (1927-28) and obtained law degree from Calcutta University in 1933. But he did not enter the legal profession. Instead, he served the Police Department as an officer for 33 years and retired in 1955.

Despite working in the adverse environment of the Police Department he maintained his natural inclination towards literary pursuit. His first book of some essays, Torun Muslim, was published in 1928. He was a keen reader of Western literature alongside the Bengali literature. He was conscious of his responsibility towards removing the all-pervading distress of the Muslim community in which he himself had been born. Behind writing the above-mentioned book was his concern for doing away the community's ignorance and superstitions. As a free thinker, it was his call to the Muslim youth to play their part in uplifting the society in which they lived.

While living in Calcutta, he earned fame as a free-thinking writer by contributing articles in the Saogat and Bulbul. He was a regular contributor to the monthly Saogat. This helped him develop close relationship with such leading Muslim litterateurs as abdul karim sahityabisharad, muhammad nasiruddin, kazi abdul wadud, kazi nazrul islam, ibrahim khan, jasimuddin, abul fazal and sufia kamal.

Some well-known books of S'adat Ali Akhand were Itihasher Xahid (1935), Otit O Bortoman (1936), Muhammad bin Qasim (1936), Osman Khan (1936), Dayud Khan (1936), Tero Numberey Panch Bosor (1969) and Onya Din Onya Jiban (1969). Tero Numberey Panch Bosor was S'adat Ali Akhand's autobiographical writing. It became vary popular in both parts of Bengal in the sixties. It was a valuable document of important facts and events relating to the political, social and revolutionary movements in British India. Bangla Academy has published under the title S'adat Ali Akhand Rachanabali (2009). Bangla Academy has been awarding since 1990 a literary prize bearing his name. He died on 12 May 1971 at Bogra. [Tahmina Hossain]