Boat Race nouka baich in Bangla and very popular game in riverine areas of Bangladesh. Boat race demonstrates the boatmen's technique and prowess in giving their boats the maximum speed and forward direction. In national boat race the boats have to cover a distance of 650 meter. Each boat can be manned by 7, 25, 50 or 100 persons. 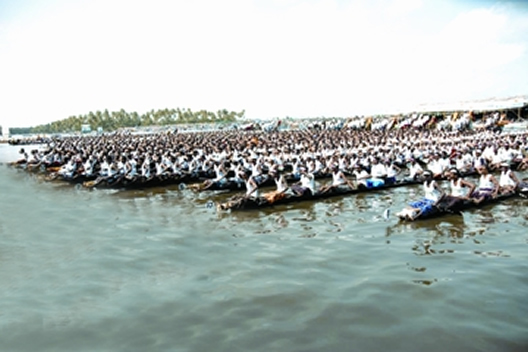 Rivers form an integral part of Bangladesh's history, tradition, literature, culture and sports. Boat race consequently, is an important element of folk culture. Rivercrafts help create ports and markets requiring the services of expert carpenters, who are often found to compete in skills in making boats. Different districts have different types of boat. In dhaka, gaffargaon and mymensingh kosha type of boats are mostly used for racing. These boats are narrow in shape and can be as long as 150 to 200 feet. Their front and back are straight.

During Muslim rule, nawabs and other ruling class people used to organise boat race. According to some sources, they used their naval fleet for this purpose. In the coastal belt of East Bengal it was necessary to maintain naval forces to protect the kingdom or occupy other kingdoms. The bara-bhuiyans of Bengal fought against the Mughal on the basis of their naval strength. A Naval force was also used to suppress Magh and Harmad pirates. Their fleet used to have sleek boats known as chhip. The boat-based naval fleets of those days are no longer there but thanks to boat racing, the excitement of their speed is enjoyed even now by the common people of Bangladesh.

In Bangladesh boat races are usually held during the Bengali months of Bhadra and Ashwin. While racing, the boatmen sing in chorus seeking God's blessings. The boats are named attractively, proclaiming their speed or design, for example, the Jharer Pakhi (bird of the storm), Pankhiraj (the king of birds), Saimun, Tufan Mail, Mayur Pankhi, Agradoot, Dipraj and Sonar Tari (golden boat).

Before boarding their boats, boatmen purify themselves and wear uniform vests and tie up scarves of the same colour around their head. Those who row standing take their position at the back. The leader stays in the middle. The drummers and the singers provide beat and tempo to the boatmen.