Administration Brahmanbaria district was formed in 1984. Earlier it was included in Comilla (previous name Tripura) district. It should be noted here that before 1830 Sarail Pargana was included into mymensingH district. Brahmanbaria Town was turned into a municipality in 1869. Of the 8 upazilas of the district brahmanbaria sadar is the largest (440.57 sq km, 23.86% of the total area of the district) and ashuganj is the smallest (69.59 sq km) in size. 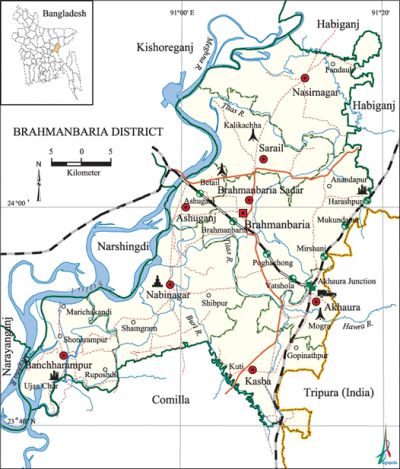 War of Liberation In 1971 Brahmanbaria district was under Sector 2 of the war of liberation. The important war fields of this sector were Akchhina, Akhaura, Asadnagar, Araibari, Ibrahimpur, Kalikachha, Kullapathar, Chandrapur, Chargach, Check Post Road, Jagharchar, Taragana, Tullapara, Devagram, Daruin, Durgarampur, Dashdona, Nabinagar sadar, Fulbaria, Bayek, Mirpur, Latuamura, Hariabaha and Khirnal. On 14 April 1971, freedom fighters Abul Hossain, Shahjahan, Lance Nayek A Hai, Subedar Sirajul Islam and Sepahy Abdur Rahman were killed in an encounter with Pak army. Bir Srestha Sipahy mohammad mostafa kamal was killed on 18 April 1971 in a frontal battle with the Pak army at village Daruin. The tomb of Bir Srestha Mostafa Kamal is located in this village. On 5 May 1971, the freedom fighters under Lieutenant Helal Murshed attacked the Pak army camp at Shahbajpur of the Sarail upazila in which 9 Pak soldiers were killed and one freedom fighter was wounded. Many freedom fighters were killed in an encounter with the Pak army on 22 November at Latoamura of Kasba upazila; and in another encounter with the Pak army 49 freedom fighters were killed. On 9 December 1971 the Pak army destroyed part of Ashuganj-Bhairab Railway Bridge on the Ashuganj side by dynamite. On the assumption that the Pak army left Ashuganj after destroying the bridge the allied forces advanced towards Ashuganj to occupy it. As soon as they reached within 50 yards of Asuganj Thermal Power Plant the Pak army launched heavy attack on the 18 Rajput Regiment and killed 70 members of the allied forces including 4 officers. Freedom Fighter Siddiqur Rahman was killed in an encounter with the Pak army at village Fulbaria of Nasirnagar upazila and 17 Pak soldiers including one rajakar were killed at village Tullapara. A number of Pak army officers and the chairman of Sarail Peace Committee were killed when the guerrilla team of the freedom fighters destroyed two military vehicles by mine explosion. The Pak army conducted mass killing at village Krishnanagar of Ujan Char union of Banchharampur upazila. On 15 November 1971 the Pak army killed many innocent civilians of Nasirnagar sadar and of the villages of Kunda, Bulakot and Gokarna unions of the upazila. The Pak army brutally killed 204 innocent people of Kautali, Pairtala, Singerbil, Natai, Majlishpur, Bijeshwar, Ramrail and Atla under Brahmanbaria sadar. The Pak army brutally killed 70 persons at Bitghar of Sarail. During the War of Liberation the Pak army used to torture and kill suspected Bangalis at a slaughter place near Ashuganj silo. Five freedom fighters of Banchharampur upazila were awarded the title of 'Bir Pratik for their heroic role in the War of Liberation.