Administration Chandina Thana was turned into an upazila in 1983. 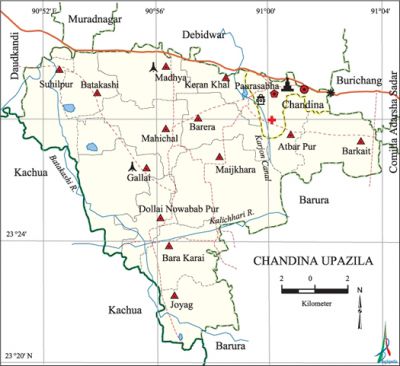 Marks of War of Liberation Mass killing site 2 (Puira Bridge east of Chandina High School and the northwest side of the Chandina Hospital); Mass grave 3: Shashan Ghat (crematorium) at Kashimpur, Baroi Para at Mahichail and Barabari at Konghai.

Sources of drinking water Tube-well 91.05%, tap 0.67%, pond 3.67% and others 4.61%. The presence of intolerable level of arsenic has been detected in shallow tube-well water of the upazila.