Administration Chilmari Thana was established in 1850 and it was turned into an upazila on 15 April, 1983. 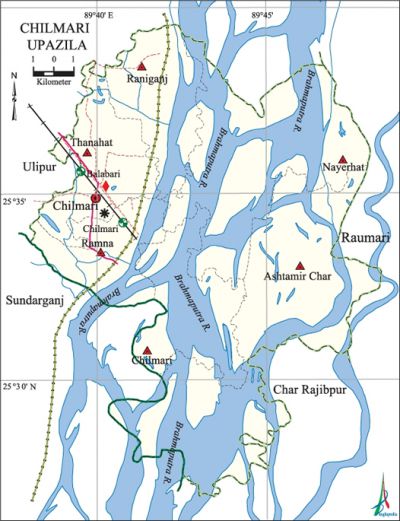 Historical Events During the 1920s many people of Chilmari were involved in the anti British movement; warrants were issued against Abdul Majid, Paresh Chandra Mallick and Naren Kumar Thakur. Paresh Chandra Mallick was arrested and was exiled to the Andamans. During the war of liberation the Pak army killed 30 persons at a place on the bank of the river Brahmaputra in Chilmari upazila on 20 May 1971. On 17 October 1971 an encounter was held between a group of 150 freedom fighters under Abul Kashem Chand and the Pak army in which 11 freedom fighters were killed; Chilmari was liberated after this encounter.

Marks of the War of Liberation Mass killing site 1 (bank of the river Brahmaputra).

Natural disasters The flood of 1974 caused heavy damages to settlements and properties of the upazila.