Chittagong Region River System the Chittagong region consists of the 5 hilly districts of chittagong division - Chittagong, Cox's Bazar, Bandarban, Rangamati and Khagrachhari. It is bounded by the bay of bengal on the south and west, the naf river with Myanmar on the southeast, and India on the east. The region is characterised by three distinct ecological zones: inter-tidal zone, coastal plains and extensive hill areas. The northern and eastern parts of the region constitute the hilly areas and are commonly known as the chittagong hill tracts (CHT). This area is covered with a deep evergreen and deciduous forest which is a habitat of many wildlife species such as the Asian Elephant (Elephas maximus), White Duck (Cairina scutulata), Banrui (Maris crassicaudata), Banchhagal (Capricornis sumatraensis), Shajaru (Hystrix indica) and other endangered species. The coastline consists of a 100 km long sandy sea beach on the Bay of Bengal. The remainder of the region consists of plains. The total area is approximately 19,956 sq km with a hilly area of 1,300 sq km. 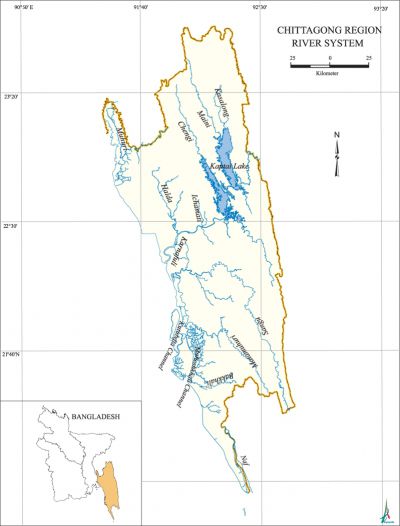 bagakain lake, a true natural deepwater lake about 1.25 km long and covering an area of 21.21 ha, lies to the east of the region. Another true natural lake, Rainkhiangkine, 1.55 km long and covering an area of 32.66 ha, also lies in CHT. The country's largest artificial water reservoir, kaptai lake, with a surface area of about 77 sq km, also lies in this region on the karnafuli river. The main rivers of the region originate in the hills. They are now increasingly subject to sedimentation due to unceasing deforestation and hilly cultivation practices (eg jhum).

The major rivers of this region are: Karnafuli and its tributaries (eg Rainkhiang, Kasalong, Halda, Ichamati etc); Bakkhali, Sangu, Matamuhuri, Naf, and Feni. Kutubdia and Maheshkhali channels are the coastal channels of the region.

The Karnafuli The principal river of the region. It originates in the Lushai Hills of Mizoram (India), flows through Rangamati and the port city of Chittagong and discharges into the Bay of Bengal near Patenga. A number of streams flow upstream of Rangamati. The streams are: one originating near Thekamukh in Mizoram-Bangladesh border flowing through Harina, barkal and Sublong; one originating at Marishwa through Myanmukh and Langadu till reaching Subhalong; one flowing through Dangumura to Myanmukh; and one flowing through Mahalchhari to Rangamati. The streams meet near Rangamati and their combined flow is known as Karnafuli. The river is flashy and its length is about 131 km. Rainkhiang, Sublong, Thega, Kasalong, Ichamati and Halda are its main tributaries. Its major distributaries are Saylok' and Boalkhali.

The only hydropower station of the country was built by constructing a dam on this river at kaptai. The Karnafuli is navigable at Barkal and Kaptai but above Barkal it is shallow. With the construction of the Kaptai dam, this river has been blocked, and a large artificial lake has been created, and the bed of the river has also been much widened. This man-made lake provides a network of all-weather navigable routes in the area. Downstream of the dam the Karnafuli receives very little water in the dry season. The opening of the sluice gates of the dam creates water movement from the lake downstream. The river finally discharges into the Bay of Bengal. The port city of Chittagong is situated at the mouth of the river. bangladesh water development board (BWDB) collects water level data through its 3 hydrometric stations located at Kodala, Chittagong and Patenga.

Rainkhiang A number of small streams originating from the eastern hills of Mizoram (India) meet together at the uppermost part of the Rainkhiang reserves (Rangamati) are known as Rainkhiang. The river makes a torturous journey through the deep reserve forests and falls into Kaptai Lake near Belaichhari (Rangamati) about 30 km above Rainkhiangmukh, its original place of confluence with the Karnafuli. The river is flashy and is 77 km long. During the wet season it is navigable up to Gobachharimukh but further above it is used only for floating timber tree and bamboo.

Thega One of the main tributaries of the Karnafuli. It meets the Karnafuli above Barkal and Subhalong and finally drains into Kaptai Lake.

Kasalong A number of small streams originating in the eastern hills of Mizoram (India) meet at Baghaichhari (Rangamati) to form Kasalong river. It falls into Karnafuli (Kaptai Lake) at Kedarmara. It is a flashy river and has a length of 65 km.

Halda It originates in the Batnatali hills of Khagrachhari. It flows south and meets the Karnafuli near Madhunaghat (Chittagong). It is a flashy river and is 88 km long. BWDB has 13 hydrometric stations on it, and data are available since 1959.

Ichamati A number of small streams meeting near Kawkhali (Rangamati) forms the Ichamati. It is a small tributary of the Karnafuli and has a length of 30 km. It falls into the Karnafuli near Rangunia (Chittagong). It is also a flashy river. BWDB has 3 hydrometric stations on this river, and data from 1956 are available.

Bakkhali A number of small streams originating in the southeastern hills of Mizoram meets the Naikhongchhari of Bandarban district to form the Bakkhali. It flows through Naikhongchhari and Ramu of Cox's Bazar district and falls into Maheshkhali channel. This is also a flashy river and has a length of about 67 km.

Myani A number of small streams originating in the eastern hills of tripura (India) meet near Dighinala of Khagrachhari district. The combined flow is known as Myani River. The river flows through Dighinala and Langadu (Rangamati) and falls into Kaptai Lake near Kedamara (Rangamati). It is 91 km long and flashy.

Chingri A number of small streams originating in the eastern hills of Tripura (India) meet at Panchhari (Khagrachhari). The combined flow, known as the Chingri, flows south through Panchhari, Khagrachhari, Mahalchhari (Khagrachhari) and falls into Kaptai lake near Nannerchar (Rangamati). This is also a flashy river and has a length of about 85 km.

Sangu This river originates in the Arakan Hills of Myanmar and enters Bangladesh near Remarki (Thanchi upazila of Bandarban district). It flows north through Thanchi, Rowangchhari and Bandarban upazilas of Bandarban district. Then it flows west through Satkania and Banshkhali upazilas of Chittagong district to meet the Bay of Bengal near Khankhanabad (Chittagong). The length of the river is 295 km. The major tributaries of the river are Chandkhali Nadi and Dolu khal. There are 7 BWDB hydrometric stations on this river and data are available from 1965.

Matamuhuri This is a flashy river that originates in the Moyvar hills of Alikadam (Bandarban). It flows northwest through Alikadam and Lama upazilas of Bandarban and Chakaria of Cox's Bazar. The river discharges into Maheshkhali channel near Saflapur (Chakaria, Cox's Bazar). The length of the river is 148 km. Yanchha khal and Bamu khal are its important tributaries. BWDB has 2 hydrometric stations on this river and data are available from the year 1956.

Naf It flows along the southernmost border line of the country. It originates in the northern hills of Myanmar and enters Bangladesh near Palong Khali of Ukhia upazila of Cox's Bazar district. The river flows through Ukhia and Teknaf and discharges into the Bay of Bengal near Sabrang (Teknaf upazila, Cox's Bazar). Most of the downstream reach of the river demarcates the Myanmar-Bangladesh border. The river is 62 km long. BWDB has one hydrometric station on the river at Teknaf and data from 1968 are available.

Feni Originates in the eastern hills of Tripura and enters Bangladesh at Belchhari of Matiranga upazila of Khagrachhari district. If flows through Ramgarh (Khagrachhari), Fatikchhari (Chittagong) and then flows along the border of Chittagong (Mirsharai upazila) and Feni (Chhagalnaiya, Feni, Sonagazi upazilas) districts and discharges into the Bay of Bengal near Sonagazi. The length of the river is 108 km. BWDB has 6 hydrometric stations on the river and data are available from 1958.

Kutubdia Channel It lies in-between the mainland of the country (Cox's Bazar) and Kutubdia Island. The length of the channel is 24 km. The channel is connected with the Bay of Bengal at its both ends.

Maheshkhali Channel It lies between the mainland of Bangladesh (Cox's Bazar district) and Maheshkhali island. The channel carries the combined flow of the Matamuhuri and its tributaries and of other rivers such as Bharuakhali khal, Bura Matamuhuri, Mangla Khal, Manikchhari khal, etc. The length of the channel is 35 km. The channel is connected with the Bay of Bengal. [HS Mozaddad Faruque]