Darus Salam Thana (Dhaka metropolitan) area 4.98 sq km, located in between 23°46' and 23°48' north latitudes and in between 90°20' and 90°21' east longitudes. It is bounded by shah ali thana on the north, adabar thana on the south, sher-e-bangla nagar and mirpur model thanas on the east, savar upazila on the west. 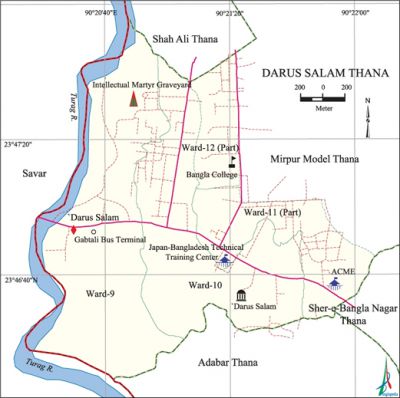 History of the War of Liberation During the war of liberation in 1971 the Pak army in collaboration with the Razakars killed many people including the intellectuals. In memory of the martyrs a memorial has been established in this thana.