Administration The former name of Gaibandha was Bhabaniganj. Bhabaniganj Sub Division was established on 27 August 1858. The head quarters of the Sub Division was transferred to Gaibandha in 1875 when Bhabaniganj was submerged into river bed due to erosion. Once this region was included in the Baharbandh Pargana. Gaibandha Town was turned into a municipality in 1923. The municipality was abolished in 1960 and it was turned into a Town Committee. In 1973, the Town was again turned into a Paurasabha. Gaibandha district was formed in 1984. Of the seven upazilas of the district gobindaganj is the largest (481.66 sq km, it occupies 22.10% of the total area of the district) and palashbari is the smallest upazila (190.67 sq km). 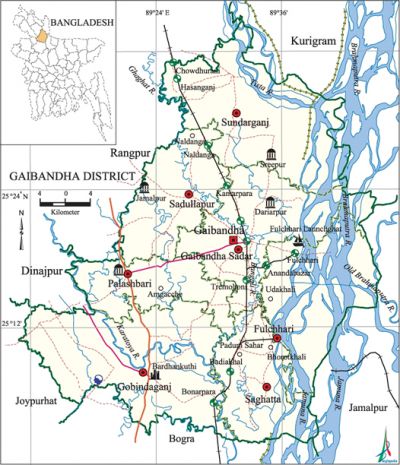