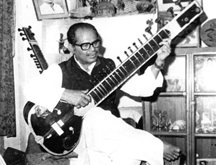 Khan, Ustad Khadem Hossain (1922-1992) musician, was born in the village of Shivpur in brahmanbaria district. He took his first musical lessons from his father, Nayeb Ali Khan, subsequently learning to play the tabla from his uncle, aftabuddin khan, and the sitar from ustad ayet ali khan. He then went to Maihar to further develop his sitar skills under another uncle, alauddin khan. He moved to Kolkata to study under Ustad Dabir Khan, a descendant of Tansen, and Birendra Kishore Roy Chowdhury, zamindar of Gouripur.

Some time before the creation of Pakistan, Khadem Hossain moved to dhaka where he occasionally performed on Dhaka Radio. After partition, he was appointed staff artiste in Radio Pakistan, Dhaka. After liberation, he became the chief music producer of the transcription service of Radio Bangladesh.

He was also music director of bulbul chowdhury’s dance group and, in this capacity, travelled to several countries such as the USA, Ireland, Belgium, and Holland. He was one of the founders of bulbul lalitakala academy, and served as music director and head of its instrumental music department.

Khadem Hossain was the managing director of the Alauddin Little Orchestra Group in Brahmanbaria and composed several symphonies for them. He set a number of poems and ballads to music, including jasimuddin's Naksi Kanthar Math, kazi nazrul islam's 'Sindhu', rabindranath tagore's 'Ksudhita Pasan', and the Mymensingh ballad Mahuya. As music director of the dance drama, Naksi Kanthar Math, he travelled to Iran, Iraq, and Pakistan. In recognition of his contributions to music, he was awarded the Independence Day Award (1980) by the Government of Bangladesh and a Gold Medal by the Comilla Foundation. [Mobarak Hossain Khan]