Nalitabari Upazila (sherpur district) area 327.61 sq km, located in between 25°01' and 25°13' north latitudes and in between 90°04' and 90°19' east longitudes. It is bounded by Meghalaya state of India on the north, sherpur sadar and nakla upazilas on the south, haluaghat upazila on the east, jhenaigati upazila on the west.

Administration Nalitabari Thana was turned into an upazila in 1983. 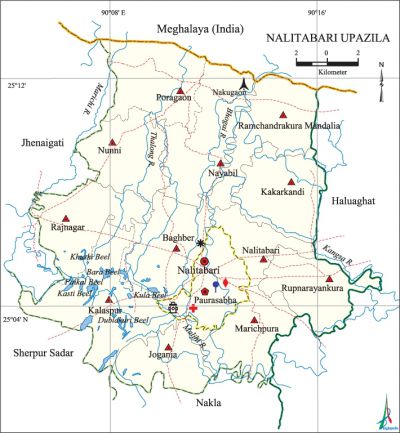 Historical events A great peasant assemblage of the eastern region of the undivided India was held in this upazila in 1937. In 1971 many freedom fighters including Commander Nazmul Ahsan were killed in an encounter with Pakistan army at Chellakhali Khal (canal). The Pak army killed 185 innocent people at village Sohagpur of this upazila.

Natural disasters Many people were victims of the famine of 1943.'