Administration Sherpur Sadar Thana was turned into an upazila in 1984. 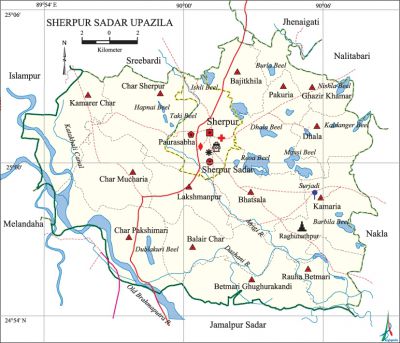 Historical events Conferences of the peasants and tenants were held in 1914 and 1917 at Kararchar area under the leadership of Khos Muhammad Chowdhury to protest against the oppression of the Hindu zaminders upon the Muslim tenants. During the war of liberation the Pak army killed 52 persons at village Suryadi. Besides, during this time the Pak army conducted mass killing and plundering; they also set many houses of the upazila on fire.

Natural disasters The earthquake of 1918 caused heavy damages to settlements and other properties of the upazila. Besides, many people were victims of the famine of 1943.