Sariakandi Upazila (bogra district) area 408.45 sq km, located in between 24°44' and 25°04' north latitudes and in between 89°31' and 89°45' east longitudes. It is bounded by saghatta and sonatala upazilas on the north, dhunat and kazipur upazilas on the south, islampur, madarganj and sarishabari upazilas on the east, gabtali upazila on the west.

Administration Sariakandi Thana was formed in 1886 and it was turned into a Municipality in 1999. 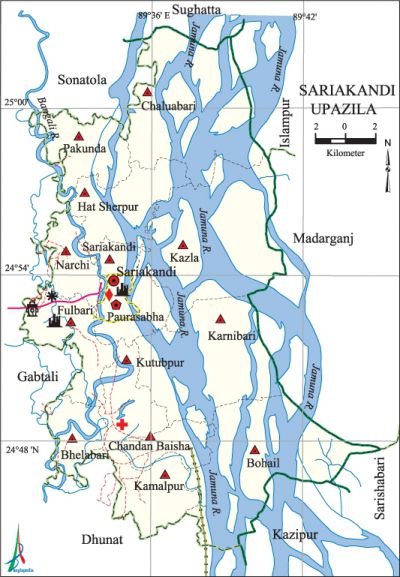 Archaeological heritage and relics Residence of zamindar Kashi Roy at village Harina under Fulbari union, remnants of' Neelkuthi at the upazila sadar.

Hats, bazars and fairs Hats and bazars are 20, fairs 3, most noted of which are Fulbari Hat, Sariakandi Hat, Chandan Baisha Hat, Sree Panchami Mela at village Harina and Paush Mela at Chaihata.

Natural disasters Many people were victims of the famines of 1866 and 1874, earthquakes of 1885 and 1897, and the floods of 1959 and 1984. These natural disasters also caused heavy damages to settlements, crops and other properties of the upazila.