Shibganj Upazila (bogra district) area 315.92 sq km, located in between 24°55' and 25°07' north latitudes and in between 89°11' and 89°28' east longitudes. It is bounded by gobindaganj (gaibandha) upazila on the north, bogra sadar, kahaloo and dupchanchia upazilas on the south, sonatola and gabtali upazilas on the east, kalai and khetlal upazilas on the west. 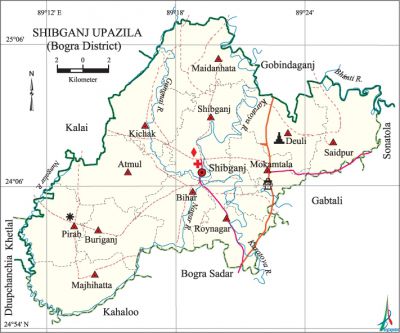 History of the War of Liberation On 4 April 1971, the Pak army brutally killed 16 persons of the same family at Maidanhata. Besides, one freedom fighter was killed in a frontal encounter with the Pak army at village Panch Pir Saralpur.