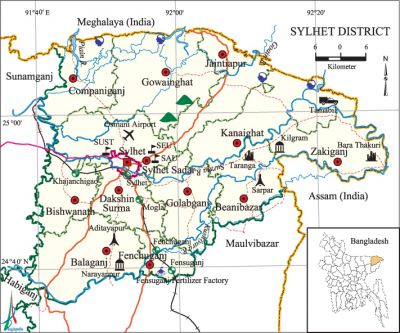 Administration Sylhet district was established on 3 January 1782. Until 1878, Sylhet was under the jurisdiction of dhaka division. In the same year, Sylhet was included in the newly created Assam Province. Municipality was formed in 1878. Up to 1947 (excepting the Banga Bhanga period of 1905-1911) it remained a part of Assam. In 1947, as a result of a referendum, it was attached to the East Pakistan and was in the Chittagong Division. The greater Sylhet was divided into four new districts viz Sylhet, Sunamganj, Habiganj and Maulvibazar in 1983-84. On 1 August 1995 Sylhet was declared as the 6th division of the country. Of the twelve upazilas of the district gowainghat is the largest (486.10 sq km) and fenchuganj is the smallest (114.48 sq km).