Taraganj Upazila (rangpur district) area 128.64 sq km, located in between 25°44' and 25°50' north latitudes and in between 89°07' and 89°57' east longitudes. It is bounded by kishoreganj (nilphamari) upazila on the north, badarganj upazila on the south, rangpur sadar and gangachara upazilas on the east, saidpur upazila on the west.

Administration Taraganj was under Badarganj thana before 1980. Taraganj Thana was formed on 1 January 1980 comprising 40 villages of Badarganj thana; it was turned into an upazila in 1984.' 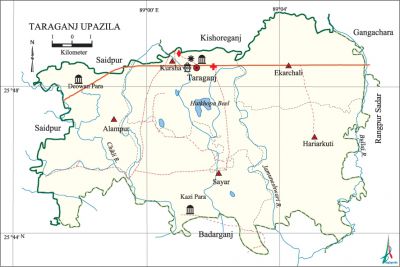 Historical events During the fakir-sannyasi resistance a serious encounter' was held on 30 December 1972 between the British army and the Fakir and Sannyasis at Shyamganj of Sayar union under Taraganj upazila in which the commander of the British army was killed; in this encounter the British army was also defeated. Krishak Praja Bidraha (peasant tenant rebellion) of 1783, popularly known as 'Rangpur Vidraha', had a major base at Badarganj. The people of this upazila took active role in various movements including like' indigo resistance movement (1859), tebhaga movement (1946-1947), Hattola (toll collection from market) Movement (1937-40) etc. During the war of liberation the Pak army captured a number of people from the village Darar Par of Sayar union in August and later on killed all of them. On 3 December 1971, the Pak army conducted mass killing at Barati Bridge over the river Jamuneshwari.

Natural disasters Due to the devastating earthquake of 1897 held in the north eastern part of India and the repeated floods, the courses of rivers of these region were changed; besides they also seriously changed the formation of land of this region. By another earthquake the river Nengti Chhera, flowing on the western side of Taraganj Bazar, was silted. It also silted the rivers Chikli and Jamuneshwari (on the eastern side of Taraganj upazila) flowing towards the south.