Barlekha Upazila (maulvibazar district) area 315.58 sq km, located in between 24°36' and 24°50' north latitudes and in between 90°01' and 90°18' east longitudes. It is bounded by beanibazar (sylhet) upazila on the north, juri upazila on the south, assam state of India on the east, kulaura, golapganj and fenchuganj upazilas on the west. This upazila is sharing a 20-km long international boundary with India.

Water bodies Main rivers: Sonai, Dhamai, Juri. hakaluki haor is the largest haor of the country and partly lies under the jurisdiction of this upazila. Area of Hakaluki Haor is 181.15 sq km, of which 72.46 sq km is within the territory of Barlekha Upazila.

Administration Barlekha Thana was formed in 1940 and it was turned into an upazila on 1 July 1983. 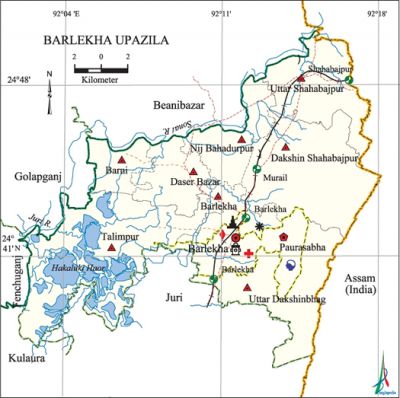 Natural resources In 1951 the BOC Oil field at Kathaltali had to be sealed with cement plug due to excessive pressure of oil. Besides, deposit of coal has been detected in the Patharia Hill and the distant area of Bobartal. The total area of forestry of the upazila is 9187.55 hectors.