Bedey a community belonging mainly to the ethnic Mong-tong (Mangta) of arakan, who in 1638, accompanied the fugitive king of Arakan, Ballal Raja, and later settled in Bikrampur area near dhaka. Many of them were converted to islam over time. Later, the Bedeys spread out to remote areas of Bengal and Assam. The Mangta people were popularly called Bedey after the Bangla word Baidda meaning village doctor. Bedeys pretend to know the art of healing, which they use as a source of living. They are skilled in hunting. Physically, they are quite close to Bangalis. 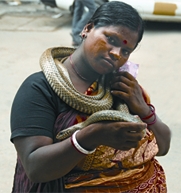 A bedey girl playing with snake

Bedeys follow the customs and practices of the Kowma society of Arakan. Apparently the community is patriarchal, but the women tend to play crucial roles in day-to-day affairs. They do all types of hard work. The community generally lives in clusters on machans (platforms) constructed by the side of rivers or on boats. Throughout the year, and especially during harvesting, they move out in groups from village to village and conduct their trade.

Bedeys call this travel gawal. They carry with them wicker-baskets of snakes or bags of herbal medicines. Usually, it is the women who go in gawal. Snake catching and snake-charming make a major source of income for them.

Towards the end of the month of Agrahayan at the beginning of winter and in the last half of Ashad, at the end of the dry season, they go in gawal with their families. The first round of gawal continues up to the middle of the month of Chaitra and the second round continues up to the middle of the month of Aswin. While in gawal, they live with their families mostly in boats, tents or in the verandas of local schools. After the gawal they return to their permanent place of residence and indulge in various festivities, in which young males and females are allowed to choose their partners and marry them with due consent of their guardians. After marriage, the husband goes to the wife's house to live permanently. The wife takes a vow that she will take care of her husband and the children. In case a young man from outside the community marries a Bedey girl by enticement, he has to pay a fine for obtaining consent of the community. Polygamy, child marriage and living in a joint family are not in vogue. Widows are not prohibited from remarriage. If divorced, husband and wife divide their properties including children among themselves. The larger share goes to the wife. 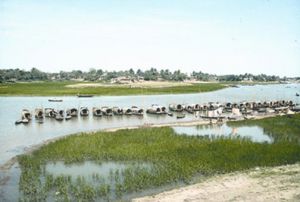 Every Bedey family, if not entirely destitute, has its own boat. A few families with their boats form a group and the boats of the group form a fleet. Each fleet takes an identity of a sub-tribe headed by a sardar. The sardar divides his fleet into a number of small groups and appoints a guide for each of the groups through whom he coordinates the community affairs. The sardar determines the trade routes and area of operation for every group. He imposes penalty for violation of norms and pronounces decree to that effect after examining witnesses and evidences. If any group fails to return from gawal in time without showing good reason, the sardar can punish them. Maintenance and subsistence of the sardar are the responsibilities of the fleet. Special fees are paid to the sardar at the time of marriage. The sardar receives gifts on the occasion of different festivals.

Besides the fleet sardars, the Bedey clans and sub-clans also have their own leaders elected in a meeting in the presence of all sardars on a fixed day of the year. In the past, the Bedey sardars used to come to the month-long fair on the occasion of Kartik Baruni Snan (holy bath) held at a place near munshiganj, where the ganges and the brahmaputra meet. They used to meet there with different Bedey groups and conduct election of leaders of the clans and sub-clans. At present they meet together for the purpose at Munshiganj and chittagong every year between 5 Kartik and 15 Agrahayan.

These meetings are also used for settling disputes that accumulate throughout the year. The Bedeys lead austere and easy life. They do not hesitate to confess their guilt to the sardar if they make any offence, even if they know that the punishment may be severe. They are omnivorous and are usually addicted to drugs. As they claim to be Muslims, they tend to maintain a minimal relationship with the local Muslims. They also practice many rites and rituals of Hindu religion.

The Bedey men wear lungi. Their women cut a ten cubit long cloth into two pieces and wear one piece on lower part of the body twisting it around the waist in two folds and hang the other piece like a scarf on the neck. They wear fatua or angi (loose shirt without collar). At present many Bedey men and women wear normal Bengal dresses. 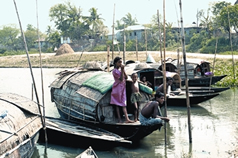 The Mong-tongs of Bangladesh are divided into nine sects. They are Lauyo, Chapailya, Bajikar, Bej, Gayin, Mellach, Bandaira, Mal and Shapuria (snake charmer). All these groups consider that doing physical work in the field is undignified. Their universal profession is to practise folk medicines and to sell indigenous drugs including different kinds of wild creepers, leaves and roots. Application of mantra (mystical verse) and jhadfuk (exorcism for expulsion of evil spirits) is very dominant in their method of treatment. Many do believe that the Bedeys are experienced in massages and in the treatment of the child diseases, arthritic pain and toothache. Bedeys demonstrate exciting jugglery and tricks, draw tattoos and display different kinds of physical feats. In the matter of treatment they use some of the traditional medicines and instruments, like, holy verses, roots of trees, bones of birds and animals, oil of hornbills (Dhanesh birds), trumpets made of the horns of the cows or buffalos, broken glasses and sharp teeth of Kakila fish.

Typically, the Bedeys assemble people in bazaars or open places by attracting them through tricks, magic shows and snake charming. The purpose is to motivate the crowd to buy their goods and services. Methods of treatment and medicines prescribed by different sects of Bedeys are different. The Lauyo Bedeys or the Babajias sell fish and garland of fish bones. These Bedeys hail from Biania of Bikrampur, Charar Ghope of narayanganj and Amirabad, Maichakhali, Hurail, Nargaon, Narayanpur, Hajiganj, laksham and Meherkalibari of comilla. The Gain Bedeys sell fragrant spices. They come from netrokona. The Bej Bedeys (Michchigiri) specialise in treatment of diseases of the eye and they live in barisal, pirojpur and nawabganj. They operate upon eyes with broken glass. The profession of the Chapailya Bedeys (Shajdar) is to sell garlands of fish bones, tiger's paws and bones of birds as healers of pain in muscles and other parts of the body. Besides they sell opium, pearl ornaments, bangles, crescent necklaces and cockles. They are expert in making and marketing beautiful Sanas (weaving sticks) for weavers.

They are also expert divers. The diving Bedeys mainly come from Tongi, Demra and Badda of Dhaka, Saturia of manikganj, tea gardens of Mirjapur and Amirabad of Comilla. The Bajikar and Mellach Bedeys sell fox bones and oil of the hornbills. The Shialya Bedeys do not have any transactions with other Bedey groups. They eat everything including cows, boars and snakes and worship the Hindu gods and goddesses. They live in lalmonirhat and in the bordering areas of India. The Bandaira Bedeys, residing largely in Lalmonirhat, sell parts of monkey bodies as medicine and earn by monkey shows. They sing in praise of ramachandra and Laksman and describe the ferociousness of Rama and Raban and the activities of Hanuman. The Mal Bedeys remove snake poison, extract teeth worms, sell medicines for healing arthritis and blow horns. They catch snakes and sell them, but they do not show games of the snakes. They reside in madaripur, Bikrampur, Dhaka, rajshahi, Comilla and noakhali. The Shapurias (snake charmers) sell amulets and talismans. They catch snakes. They show feats of snakes, but do not sell them. They worship the manasa (the goddess of snakes). They live in Bikrampur of Dhaka and sunamganj of sylhet.

Like all other citizens of the country, Bedeys are entitled to all civic rights including right to vote. However, their number in Bangladesh is gradually decreasing. Some Bedeys have changed their profession and have now lost their original identity. [Jainal Abedin Khan]