Administration Sonagazi Thana was formed in 1920 and it was turned into an upazila in 1983. 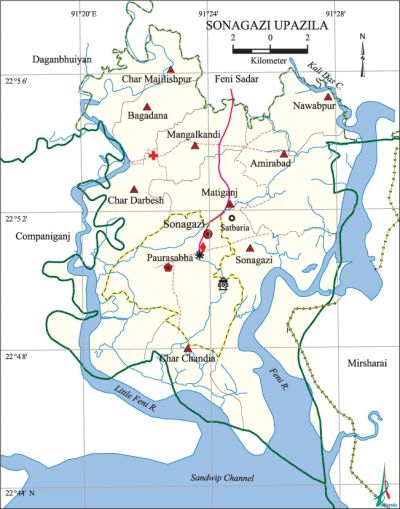 History of the War of Liberation On 28 July 1971, an encounter was held between the freedom fighters and the Pak army at Nawabpur in which Pak military commander Gul Mohammad was killed. On 15 August, 50 Pak soldiers were killed by mine explosion (planted by the freedom fighters) at a place adjacent to the Satbaria Bridge. In retaliation, the Pak soldiers killed 5 innocent persons of Baksha Ali, Sujapur Dasgram; the Pak army also conducted plundering and set many houses of the area on fire.

Marks of the War of Liberation Memorial monument 8.

Natural disasters Many people were victims of the devastating cyclones and tidal bore of 1876, 1961, 1985 and 1991; besides, these natural disasters also caused heavy damages to settlements, live stock and other properties of the upazila.