Kalaroa Upazila (satkhira district) area 232.64 sq km, located in between 22°48' and 22°57' north latitudes and in between 88°54' and 89°09' east longitudes. It is bounded by sharsha, jhikargachha and manirampur upazilas on the north, satkhira sadar and tala upazilas on the south, keshabpur, Manirampur and Tala upazilas and the kobadak river on the east, west bengal state of India on the west.'

Administration Kalaroa Thana was formed in 1851 and it was turned into an upazila in 1983. Once Kalaroa was the headquarters of Satkhira Sub Division which was transferred to Satkhira in 1961.

Archaeological heritage and relics Shymsundar Mandir, Three storied Math at Sonabaria, Kotha Bari Than (believed to be the part of a Fort built by the Dewan of Emperor Jahangir), Cheraghat Kayem Mosque (1862). 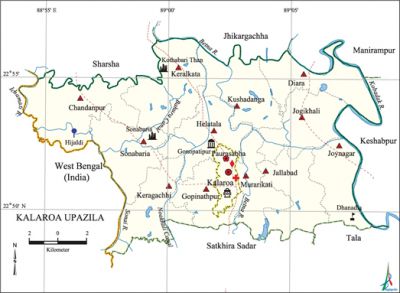