Administration Rajasthali Thana, now an upazila, was formed in 1909. 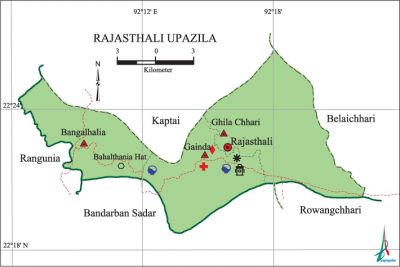 History of the War of Liberation In 1971 the Pak army conducted mass killing, torture and plundering; they also set many houses of the upazila on fire. The separatist Mizo armed guerrillas of the Mizoram state of India collaborated with the Pak army in this upazila during the war of liberation. An encounter between the freedom fighters and the Pak army was held in Gainda union (border area of Bandarban district) in which 5 freedom fighters were killed. Rajasthali was liberated on 15 December.

Fisheries, dairies and poultries Fishery 6, dairy 22, poultry 65. Besides, varieties of fishes are caught from the nearby Kaptai Lake.