Administration Bakerganj district was established in 1797; later on it was renamed as Barisal district. Barisal was declared as a division on 1 January 1993. Barisal Paurasabha was formed in 1957 and it was turned into a city corporation in 2000. Of the 10 upazilas of the district hizla is the largest (515.36 sq km) and banaripara is the smallest (134.86 sq km) in size. 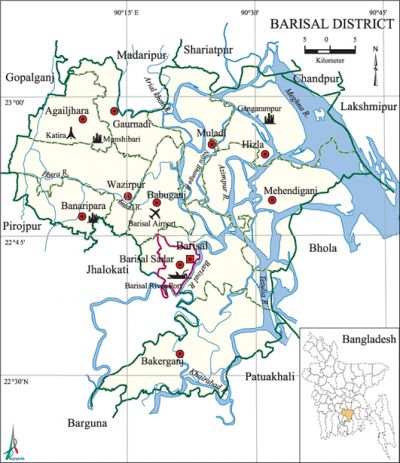 History of the War of Liberation During the war of liberation 8 persons including Laskhan Das (proprietor of Laskhan Das Circus) of village Kodaldhoa were killed by the Pak army. The Pak army also killed 181 freedom fighters at a place near Kalaskati market of Bakerganj upazila. The Pak army killed 10 persons and set Karikarnagar village of Chandpasha union of Babuganj upazila on fire. Besides, they also killed 212 persons of Banaripara upazila.