Folk Culture Bangladesh for centuries has been an rural society and still majority population live on land. Obviously, its ways of thinking and activities are heavily drawn from the rituals and seasonal rhythms of rural life. Despite the present trends of urbanisation and globalisation, the underlying culture, in both urban and rural communities is folk oriented.

Interestingly, there are remarkable similarities in the folk cultures of the societies of all parts of the world. The 6-volume Motif Index prepared by the folklorist Smith Thomson indicates how folk peoples of different countries show the tendencies of likeness in so many ways. Thus, the peasants of Bengal hang from their roofs a sheaf of harvested paddy as a symbol of good luck. The peasants of many other countries do the same. 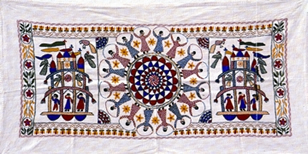 There was a time when the weavers of Bengal earned worldwide fame with their exquisite muslin. The fame of jamdani fabric still survives. The clay statues of Hindu gods and goddesses made by the potters are superb examples of their craftsmanship. They also make fancy pots for worshipping various deities. Since ancient times carpenters have been making wooden beds, doors, door frames, boats etc. At one time they used to make ocean-going ships with fancy names such as mayurpabkhi, saptadibga, chauddadibga etc. Bamboo, cane, timber, jute and spongewood grown in Bengal are used to make a variety of essential and fancy goods and curiosities. While many of these items are produced by craftsmen for sale, many items are made by housewives during their leisure hours or as part of their household routine. Shika or hanging string bags, used to keep food safe from insects and animals are both aesthetic and functional. Apart from cooking routinely she does many other things. The village woman makes ornamental rice cakes, as tasty as they are attractive. 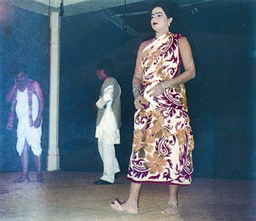 Folk art includes a variety of different decorative arts: alpana, pottery painting, wall painting, body painting etc. Alpana, drawn by a housewife as part of her devotional duties, fulfills a religious purpose as well as satisfies an aesthetic need. Evolving from what was a devotional art, alpana has become a decorative art and is done on floors, pillars, walls, winnowing platters and baskets, on the occasion of both Hindu and Muslim weddings as well as at cultural functions and at public places on national days. Canvas painting by patuas occupied the forms of religious tales.

Quilt embroidery falls in the category of stitch craft. It is done exclusively by village women. Though intended to be used as bed sheets, winter covers and pillow covers, these quilts are admired for their aesthetic beauty even by educated people at home and abroad. Because of their increasing demand, these quilts are now being commercially produced in urban areas.

meyeli git, saheli git and hudma git reflect the' attitude of women life and the world. Holi git, gazi git, magan git, wedding songs, hudma git are presented on appropriate occasions with the necessary rituals. Some songs are presented by professional singers known as gayen, bayati and gidal while others are sung by farm labourers and other workers at home and outside for relaxation and pleasure.

Farming has various rites and rituals. Some are pre-harvest rites and others are post-harvest. Among the pre-harvest rites are megharani, hudma deya and beb biya (wedding of frogs) for rains and ksetbandhan, kaktaruya and gasvi for protecting the crops. Post-harvest ceremonies include laksmir chhad, navanna and magan. There are also rites particular to only Hindu women such as tusu, bhadu, karam and basudhara. 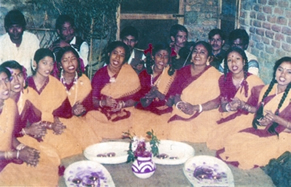 There are a number of folk games played indoors and outdoors, some involve heavy exercise, others are only for relaxation. Ha-do-do is a popular sport and is now recognised as a international competitive event. People from different social strata enjoy bali khela, boat race, bauchhi, dariyabandha, gollachhut, nunta, chikka, dangguli, solaghunti, mogal-pathan, ekkadokka, baurani, kadikhela, ghuntikhela, kanamachhi, kite flying, pigeon flying, cockfight and bullfight. In some areas of the country, boat race, bali khela and bull-fight are organised with a great deal of fanfare and music.

There is a popular saying that Bangalis have thirteen festivals in twelve months. Apart from the Vedic deities, there are popular deities whose celebrations intersperse the routine of daily life. Many of the celebrations are based on lunar and solar motions as well as on animal and natural forces. Among these deities are Laksmi, Manasa, shitala, Sasthi, oladevi, Banadurga, Daksinray, Satyanarayan and Panchu Thakur. Many Muslims too worship pirs and saints such as Satyapir, Gazipir, Manikpir, Madarpir, Khowaz Khizir, Ghorapir, Banabibi, Olabibi and Hawabibi. 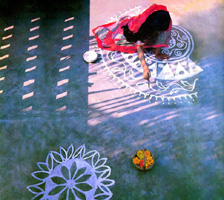 Folk beliefs tend to be syncretistic taking the elements from all co-existing religions. Take the example of Hindus and Muslims. There is no doubt that Satyanarayan and Satyapir and Banadurga and Banabibi are the same pair of sanctified persons. Similarly, there are many fairs which are attended by the people of both communities. Formerly, Muslims joined the Hindu rathyatrafairs while Hindus joined the Muslim muharram fairs. Baishakhi fair is now a national festival. At dewali, the Hindus float lamps and the Muslims do likewise at Muharram mabgalghat and mabgal pradip were quite shared ceremonies.

Anthropologically, as a nation Babgalis make a mix of Austric, Dravidian, Negrito and Mongolian races. The Aryan inroads and the Semitic came later, bringing with them a mix of cultures as well. This mixing and assimilation of cultures are evident in Bangladeshi weddings: the exchange of rings is European, the food served Turkish or Mughal, but the bride still comes in a palanquin in some rural places and in cars in cities. However, it is in the ceremonies that precede the social function that the common folk culture manifests itself most articulately. Both Hindu and Muslim communities observe the gaye halud (smearing turmeric paste on the bodies of the bride and the bridegroom), decorate platters and kulas with wedding gifts, give ceremonial baths to the bride and the bridegroom, welcome the newly-wed couple to their new home and on their visit to the house of the bride's parents.

Living in close proximity for centuries has helped different rural communities, irrespective of their professions and religious and other beliefs, to learn to live together in harmony. [Wakil Ahmed]