Rajshahi District (rajshahi division) area 2407.01 sq km, located in between 24°07' and 24°43' north latitudes and in between 88°17' and 88°58' east longitudes. It is bounded by naogaon district on the north, west bengal state of India, kushtia district and Ganges river on the south, natore district on the east, nawabganj on the west. The region consists of barind tract, Diara and Char lands. 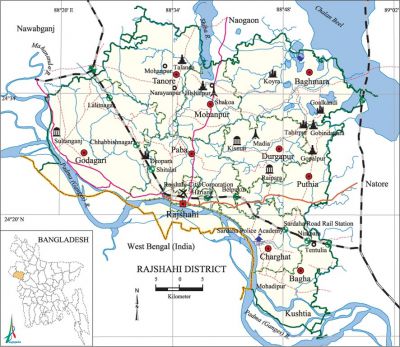 Administration Rajshahi district was established in 1772. Subsequently Maldaha, Bogra, Pabna, Natore, Naogaon and Nawabganj districts were formed, in phases, comprising parts of this district. Rajshahi Town was turned into a Municipality on 1 April 1876; the Municipality was again turned into Municipal Corporation on 13 August 1987 and it was further turned into a city corporation in 1991. Of the nine upazilas of the districts godagari is the largest (472.13 sq km) and mohanpur is the smallest (162.65 sq km).