Transport The history of transportation in Bengal starts with water transport since the land is basically riverine and in the absence of a road system, waterways were preferred as the easiest for movements and carrying goods from one place to another. People from allover the world, especially from the Arab countries, Turkey, Portugal, France and England came to India in the past by using sea routes. The British rulers had significant contribution in development of modern transportation system in the subcontinent and railway was first introduced in Bengal in 1862. The eastern part of Bengal, however, did not receive proper attention in this regard during the British period. The government of Pakistan also did not do much in developing the required transportation system in East Pakistan. After independence in 1971, Bangladesh inherited a transport network severely damaged during the war of liberation. The transport sector of Bangladesh experienced massive development with the help of donor funding and technical assistance from abroad during the three decades after independence. 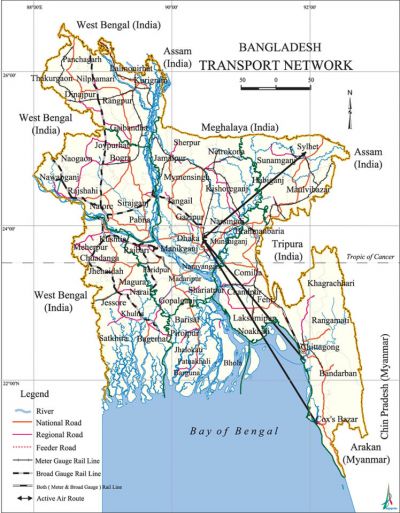 Bangladesh lies at the apex of the bay of bengal with rivers flowing down from the surrounding countries. Nearly the whole area of the country consists of low and plain lands 24,000 km long network of inland waterways. Three major river systems and their confluence form the world's largest delta. Bangladesh has about 9,000 sq km of territorial waters with about 720 km long coast line and about 20,000 sq km of Economic Resources Zone (ERZ) in the sea. About two-thirds of the land is vulnerable to flooding and most areas remain under water for two to five months in a year. As a result, costs of development and maintenance of roads and railways are comparatively higher. On the contrary, inland water transport has always been a natural and relatively cheap means of transport in Bangladesh. In certain areas, it is the only mode of transport. Including the country's unclassified routes, the total length of waterway (700 rivers) is about 13,000 km. Of the total waterway, 8,433 km is navigable by larger vessels in the rainy season (5,968 km of which is classified for navigation), reducing to about 4,800 km in the dry season (3,865 km of which is classified).

The number of launches and steamers registered with the Inland Water Transport Authority (IWTA) in 1970 was 2,712. The government has a pool of water transport vessels under its own agency, the Inland Water Transport Corporation, which on average, carries 1.3 million passengers, 45,000 tons passenger cargo and 1.3 million tons unaccompanied cargo in a year. Launches, steamers and ships registered with the IWTA of Bangladesh annually carry about 80 million passengers and 6 million tons of cargo. Until the beginning of 1990, the ferry services of the corporation annually transported 3.5 million passengers and the figure on this count had significantly gone down after construction and opening of the large bridges like the Daudkandi Bridge, the Meghna Gomati Bridge and the Bangabandhu Jamuna Multipurpose Bridge. 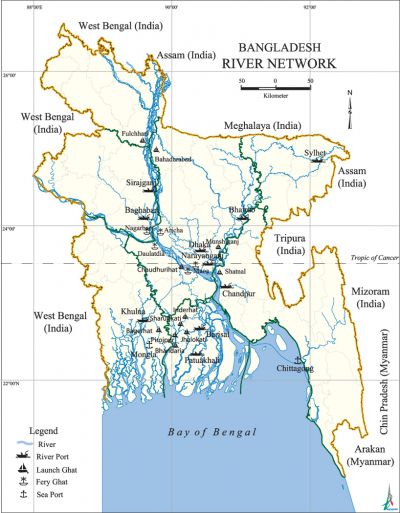 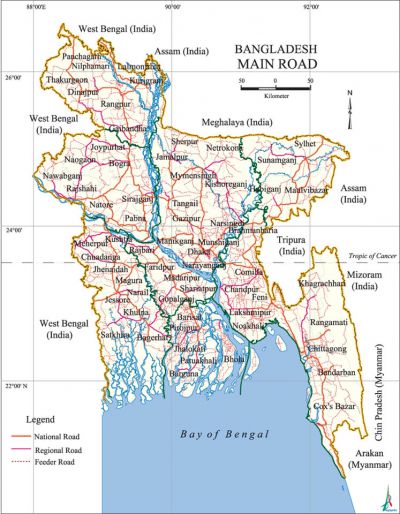 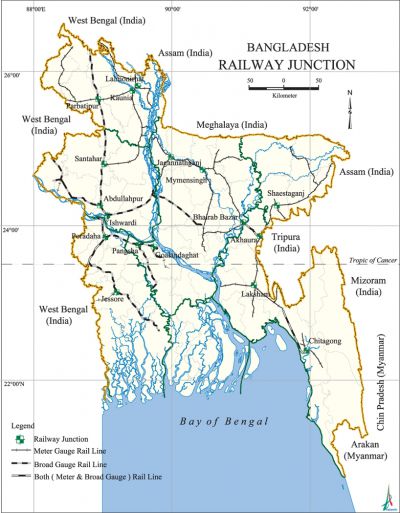 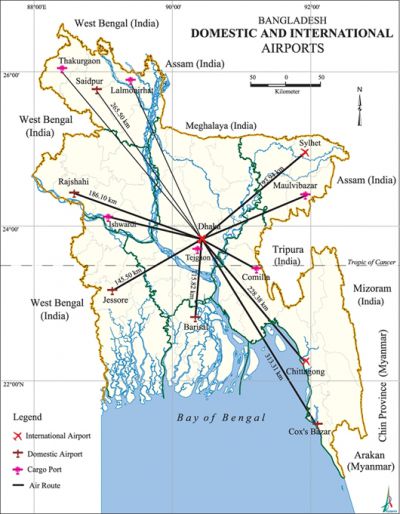 bangladesh shipping corporation is the main agency operating with ocean going vessels. The first vessel with which the corporation started operation was the Banglar Dut. By 1978, the corporation owned 22 with a total carrying capacity of 306,806 tons. Ever since the corporation did not gain much in the number of vessels or in terms of cargo carried. It has now 36 ships with a capacity of 405,845 MT. Bangladesh, however, gained in both of the number of sea going vessels and the carrying capacity after the private sector was allowed to join in the business. Chittagong and Mongla are the only two seaports of the country carrying out over 80% of the exports and over 95% of the imports through sea routes.

The Mughal emperors developed some military and commercial roads and highways, most of which went out of use by the end of the 18th century. Most famous among them was the grand trunk road constructed originally as the Sonargaon Sarak. Dhaka was connected with nearby districts by good roads, which is evidenced by the remains of bridges at Tongi and Pagla built by Mir Jumla in 1661. There had been little development of roads and highways in the Bangladesh territory during the British period. In 1947, the total length of pucca (metalled) road of good quality in East Pakistan was less than 480 km. Prominent among such roads was the one stretching 56.32 km between sylhet and Tamabeel. The total length of kacha (unmetalled) roads in the province at that time was 36,000 km. There had been a relatively fast development of roads and highways after 1947 and by 1970, the province had 3,860 km of pucca roads. The achievements of Bangladesh in the first two decades after its independence were quite impressive. In 1985, the Roads and Highways Department had 5,404 km of pucca road of all kinds and 3,112 km of kacha road. Around this time, pucca roads under the district councils and municipalities totaled about 9,000 km and the kacha roads about 15 million km. The total length of pucca roads in Bangladesh was 20,947.73 kilometre in 2010.

There were only 4,380 motor vehicles in East Pakistan in 1947. The number of motor vehicles rose to 133,253 in 1985. Despite this increase in number of vehicles, the figure on persons owning vehicles in 1985 remained almost unchanged at the vicinity of 12,000. Thanks to massive activities of the Local Government Engineering Division in construction of rural roads and increased involvement of private sector in the road transportation business the situation with road transport had undergone rapid changes in the 1990s. Town services as well as inter-city bus transport and private taxicab services significantly improved through introduction of many large bodied modern buses. The roads and highways were upgraded by renovation and extension. The number of different types of registered vehicles plying in the roads of Bangladesh in June 2011 was 15,96,000 including buses and minibuses, 94,298 microbuses, 87,182 trucks, 215,786 cars, 12307 taxis, 191,153 autorickshaws and 848,372 motorcycles.

The first railway line in Bangladesh was the 53.12-km one between Darshana and Jagati formally opened on 15 November 1862. A rail line connecting dhaka with narayanganj was constructed in 1885 and ten years later, two more lines were opened, one between chittagong and comilla and the other between laksham and chandpur. The Bangladesh Railway, formed on 16 December 1971, is the product of reorganisation of assam bengal railway created in 1891 and renamed in 1942 as the Bengal and Assam Railway. In 1947, the East Pakistan part of Bengal and Assam Railway got the new name the eastern bengal railway, which it retained up to 1971.

In 1951, the total length of railways in Bangladesh territory was 2,610 km, of which 805 km was broad gauge, 1773 km was metre gauge and 32 km was narrow gauge. The narrow gauge railroads were converted into metre gauge during the 1960s. The railroads in Bangladesh in 1985 totaled 2,892 km, of which 979 km was broad gauge and 1,913 km was metre gauge. The total number of railway stations in the country was 517 in that year. Abundance of rivers and the high cost of construction of bridges are the major problems in development of railroads in the country. The construction of the bangabandhu jamuna multipurpose bridge opened up the scope for expanding the railways, especially for connecting the Bhuapur end of the bridge with Dhaka via tangail. Most part of the construction works of this km long section was completed by 2001. The total length of railroads however, reduced during the 1990s as some sections were closed for being not viable for operation in the context of a significant improvement in roads and highways and reduction in railway traffic flows. In 1997, the railways had 489 stations along the 2,706 km route. Of this, 884 km was in broad gauge with 337 stations and 1,822 km in metre gauge with 152 stations. The railways in Bangladesh carried 2.936 million tons of cargo and 37,494 million passengers in 1997. In 2011, Bangladesh had 2855 km routes. In 2006-07, the number of stations reduced to 440. Earning from freight charge also marked a fall 1311.236 million taka in 2008-09 to 1163.612 million taka in 2009-10. Bangladesh Railway carried 778.54 million MT of goods in 2006-07. The volume reduced to 712.78 million MT in 2009-10. To attract more passengers, the government transferred some sections of the railroads and some trains to private management under lease arrangement and had also partly implemented it. This contributed to reduction in losses the Bangladesh Railway had long been incurring every year and also to some improvements in the quality of services in transportation of passengers and cargo.

air transport in East Bengal started with military aviation, especially during the World War II, when airstrips were built at Dhaka, Comilla, feni, Chittagong, cox’s bazar, chakaria, Sylhet, jessore, rajshahi and lalmonirhat. There had been no civil aviation in this part of India until 1947. Improvements in civil aviation during the period between 1947 and 1971 included development of the Dhaka airport as an international one and introduction of domestic flight services. Bangladesh has now (2011) 10 airports including Shah Jalal International Airport (former Zia International Airport) in Dhaka, Shah Amanat International Airport in Chittagong and Osmani International Airport in Sylhet. The biman bangladesh airlineS LIMITED was created in 1972 with a Second World War vintage Dakota, DC-3, taken from the airforce. Biman procured two used F-27 aircraft, which were soon airborne with flights to Chittagong and Sylhet. The international flights began on 4 March 1972, with an aircraft chartered from the British Caledonian. In 2001, Biman operated a 7-destination network of flights at home and had 26 major international destinations. In the fiscal year 1999-2000, Biman carried 128,568 passengers and 36,272 tons of payload cargo. At present Biman has 12 aircraft in its fleet.

Biman was the sole operator in civil aviation of Bangladesh until 1996, since when some private airlines started coming up with their own fleet to carry passengers and cargo within the country. The companies that received license to operate in civil aviation until are operating domestic, regional and international flights. Many private companies including the Aero Bengal Airlines, Air Parabat, Bismillah Airlines, GMG Airlines, Best Aviation, and Air Maximus were given permission to operate, but only United Airlines could sustain by 2012. [Sadat Ullah Khan]