Administration Rangamati Sadar Thana was turned into an upazila in 1983. 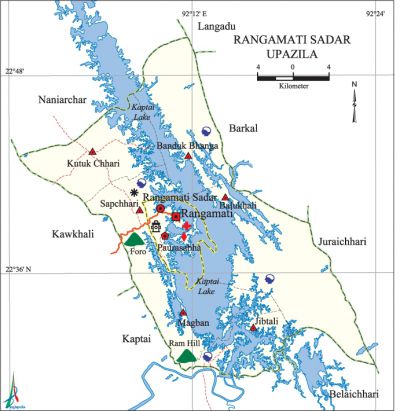 Historical events Ranagamati Sadar upazila was under Sector 1 during the war of liberation. On 27 March 1971 a temporary training camp of the freedom fighters was established in the playground of the Station Club. On 29 March a group of 60 freedom fighters crossed over to India to receive arms training. On 2 April then Deputy Commissioner Hossain Towfiq Imam distributed a huge amount of money and arms and ammunitions (belonging to Police, EPR and Ansar) to the freedom fighters from the treasury. On 10 April the first group of freedom fighters returned back to Rangamati and later on they gave arms training to freedom fighters of different areas. On 20 May 1992 an encounter was held between the indigenous people and the Bangalis. As per the chittagong hill tracts peace accord in 1997, the headquarters of the Anchalik Parishad (regional council) was established in Rangamati Town.