Belaichhari Upazila (rangamati district) area 745.92 sq km, located in between 21°54' and 22°33' north latitudes and in between 92°17' and 92°36' east longitudes. It is bounded by juraichhari and rangamati sadar upazilas on the north, ruma and thanchi upazilas on the south, Mizoram (India) and Myanmar on the east, kaptai, rajasthali and rowangchhari upazilas on the west.

Administration Belaichhari Thana was formed in 1976 and it was turned into an upazila in 1983. 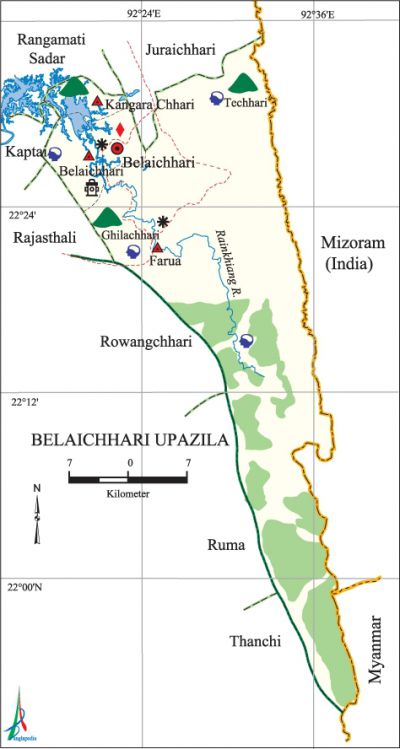 Historical events Once tribal insurgencies were regular features in this upazila. After the defeat of Pak army in 1971in the hands of the freedom fighters, about 2000 tribal rajakars joined the rebel Mizos of the tribal area. Manabendra Narayan Larma took their lead and later formed the shanti bahini. In order to resist the activities of the Shanti Bahini the Farura outpost was established in the border area. Later on Shanti Bahini and the Jana Sanhati Samity shifted their main camp to Tripura; as a result the importance of the Farura outpost was minimized and it was included with the Belaichhari Thana. Besides, about 30 thousand people were killed in encounters with the Shanti Bahini.