Administration Jamalpur district was established in 1978. Of the seven upazilas of the district jamalpur sadar is the largest (489.56 sq km, it occupies 24.09% of the total area of the district) and bakshiganj is the smallest (204.30 sq km). 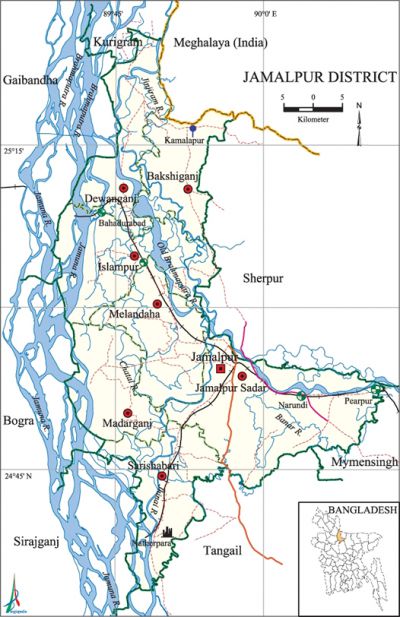 Historical events Most notable historical events of the district include fakir-sannyasi resistance (1772-1790), indigo resistance movement (1829), famine (1874), construction of the railway communication (1899) and the war of liberation in 1971. The Pak army, in collaboration with the local razakars, conducted heavy genocides in Jamalpur. On 21 June, the Pak army killed 9 persons at the Shashan Ghat (cremation centre) of Jamalpur sadar upazila on the bank of the Brahmaputra. A battle was fought between the freedom fighters and the Pak army on 31 July at Kamalpur Pak Army Base of Bakshiganj upazila causing heavy loss to the occupation army; in this battle 35 freedom fighters including Capt. Salahuddin Momtaz, Ahaduzzaman, Abul Kalam Azad were killed. A battle was fought between the freedom fighters under Sector Commander Col. abu taher and the Pak army on 13 November at Kamalpur of Bakshiganj upazila. In this battle Col Taher was seriously wounded. The well protected Pak military base at Kamalpur eventually fell on 4 December in the face of heavy attack by the freedom fighters for 21 days. In this battle 220 Pak soldiers under Capt. Ahsan Malik surrendered to the freedom fighters.

Folkculture Various kinds of folk songs are prevalent in the district. These include Gunaibibir Gan, Jari Gan of Khairun, Palagan of Rupvan, Panchali, Ghetu Gan and Meyeli geet (songs sung by women on the occasion of marriage and Gaye Holud festivals). In the rural areas, various folk games and sports are performed on competitive basis. These include bull fight, horse race, Moi (ladder) race, Lathi Khela (stick game); besides, during the rainy season boat races are arranged in the Jamuna river. The Garo community of the district perform dances on the 'Bigan Gala' festival.