Arsenic brittle, greyish-white, semi-metallic element, symbol As, atomic number 33 and relative atomic mass 74.92. It occurs in many ores and occasionally in its elemental state, and is widely distributed, being present in minute quantities in the soil, sea and human body. It is used in making semiconductors, alloys and solders. The natural concentrations of arsenic in most cases are harmless to public health. Recent increases in anthropogenic activities have resulted in elevated arsenic concentrations in different environments and pollution of the air, soil and water has become a serious health hazard in different parts of the world. Arsenic (As) and arsenic compounds are used in a variety of ways for the benefit of mankind but beyond a limit they become a deadly killer. Higher arsenic concentrations are associated with anthropogenic sources such as emissions from smelters. Arsenic concentrations in river water are normally low except in areas having geothermal water or where there is mining. 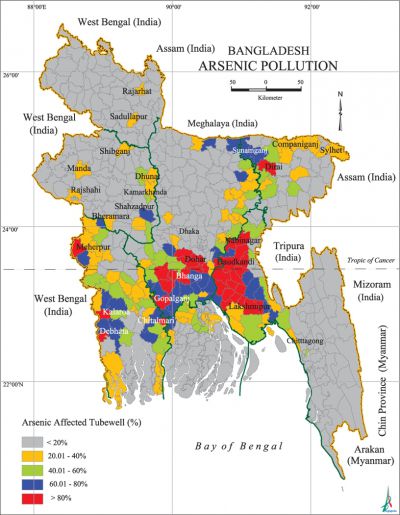 Arsenic concentrations in igneous, metamorphic and sedimentary rocks vary considerably. Sedimentary rocks generally contain more arsenic than igneous and metamorphic rocks. There is considerable variation in the concentration and mode of occurrence of arsenic in sedimentary rocks. Arsenic in nonmarine shales/clays are generally adsorbed by clay minerals, whereas arsenic associated with marine shales/clays is present in pyrite and organic matter. Clay minerals, organic matter, iron and manganese oxides, which normally occur as coating on sediments, commonly adsorb trace elements such as arsenic. The application of arsenic herbicides and pesticides represents a primary source of environmental arsenic contamination. On a local scale, significant air pollution with arsenic can occur from the burning of trash cotton plants sprayed with arsenic as in some parts of USA. The main sources of arsenic pollution in surface waters include domestic and industrial waste, wooden power poles, base metal mining and smelting, and fallout of contaminated aerosols.

High concentrations of arsenic have so far been reported from the Cordoba region of Argentina, the Antafagasta province of northern Chile, the Coahuila-Durango area of Mexico, the Tanian region of Taiwan, different parts of USA, and from west bengal in India, along the western border of Bangladesh. Very recently arsenic contamination in groundwater has been reported from the southwestern and southern districts of Bangladesh.

Use of arsenic dates back to as early as 3000 BC when arsenic compounds were employed in bronze alloys. They were used as medicaments well before 400 BC. Their use as compounds for insecticides dates back to ancient times, eg sandarach (realgar or red arsenic sulphide) was used for protecting grapes. The Chinese are believed to have used arsenic compounds as insecticides as early as the 10th century AD, and during the Middle Ages arsenic compounds were widely used in agriculture. The discovery in 1868 by an American farmer of Paris Green (copper acetoarsenite) as an insecticide to control potato beetle began the widespread use of arsenic in agriculture.

Among the government organisations, NIPSOM has so far done considerable work both in terms of identifying arsenic affected patients and analysing groundwater. Among the NGOs, Dhaka Community Hospital (DCH) in collaboration with SOES, conducted surveys in 61 districts of Bangladesh for identifying patients alongside water testing. Other NGOs involved include brac, NGO Forum, grameen bank, and BCAS. Among educational institutions, the Geology Department of Dhaka University is working with University College, London, and the Royal Institute of Technology of Sweden. The bangladesh university of engineering and technology (BUET) is also working in collaboration with national and international organisations. Rajshahi University is also conducting research on arsenic.

International organisations such as the United Nations International Children's Emergency Fund (UNICEF), World Health Organisation (WHO), World Bank (WB), International Atomic Energy Agency (IAEA), United Nations Development Programme (UNDP) are now actively supporting the government and NGOs in the field of arsenic investigation and mitigation. The Bangladesh Arsenic Mitigation Water Supply Project (BAMWSP) has been launched with a mandate to form the national database on arsenic and to implement the mitigation strategies. However, the most comprehensive and systematic survey was conducted by DPHE in 1998-99 in collaboration with the British Geological Survey and Mott MacDonald Limited.

Two different techniques are being used in Bangladesh to test arsenic in groundwater. One is called the 'Field Kit Method' which is qualitative to semi-quantitative. The second method is laboratory analysis, which is quantitative and gives the exact concentration of arsenic in groundwater. Since 1993, there has been a lot of testing of water samples using both field kits and laboratory methods. DPHE/UNICEF conducted a random national survey using field kits; so far they have conducted about 51,000 tests of which about 29% are positive, ie have found arsenic above the Bangladesh standard. Apart from the national survey, there have been a number of upazila and village surveys where the percentage of contaminated wells reached up to 100. Apart from the field test kit results, there has been a lot of laboratory testing by different organisations including DPHE and DCH. The worst affected districts are chandpur (90%), munshiganj (83%), gopalganj (79%), madaripur (69%), noakhali (69%), satkhira (67%), comilla (65%), faridpur (65%), shariatpur (65%), meherpur (60%) and bagerhat (60%). The least affected districts are thakurgaon, panchagarh, nilphamari, natore, lalmonirhat, patuakhali, and barguna, where none of the samples exceeded the Bangladesh limit. Mainly the southern half of the country is contaminated, but there are a few occurrences of contamination in the northeast as well. The north is either free of contamination or sparsely contaminated. Field and laboratory testing results done by different organisations have confirmed this general pattern although there are a few local pockets of contamination (hot spots) within the uncontaminated areas. About 30 million people are likely to have been exposed to high arsenic levels in their drinking water.

The contaminated parts of the country coincide with the Ganges Deltaic Plain (GDP) and Meghna Estuarine Plains. In West Bengal also arsenic contamination is restricted to the Upper Deltaic Plain which is part of GDP. The depositional history of the area is influenced by the sea level changes during the Pleistocene age and by the thick alluvial sequences developed in the incised river valleys formed due to a drop in the sea level.

Since the problem was first discovered, a number of hypotheses were put forward to explain the origin of arsenic. These included both man-made and natural causes. Of the man-made ones, the use of fertilisers, pesticides, insecticides, waste disposal, and arsenic treated wooden poles for power grids were blamed for the contamination. On the other hand, SOES put forward the pyrite oxidation hypothesis to explain arsenic contamination in the bengal basin and this was accepted at the beginning. At an international conference organised by DCH and SOES in Dhaka in February 1998, it was agreed that the contamination was of geological origin, not a man-made one. At the same conference an alternative hypothesis, known as iron oxyhydroxide reduction, was put forward and widely accepted. In Bangladesh there is no apparent correlation between arsenic occurrence and irrigation abstraction, nor is there a correlation between lowering of the groundwater table and its occurrence.

Pond sand filter this is a slow sand filter that utilises pond water. A sand filter is constructed near a reserved pond and this can provide arsenic and bacteria free drinking water. However, maintenance is a major problem.

Rainwater harvesting rainwater is also being considered as a source of arsenic-free water, at least during the monsoon. Rainwater is collected and stored in large earthen or ferro-cement jars for drinking.

Arsenic contamination in groundwater is not a new health hazard faced by mankind but what is new and unique in Bangladesh is the extent of the pollution and the number of people exposed to it. A most conservative estimate shows about 30 million people exposed to arsenic. It is going to be a mammoth task to mitigate the problem and provide this population with alternative safe drinking water. It is clear from the map of contaminated areas which localities should be taken up for emergency action and which can be left out. There are different options for mitigation which include household filters, community based arsenic removal plants, sinking of deeper wells, use of surface water and rain water harvesting. [Kazi Matinuddin Ahmed]